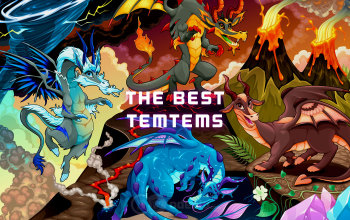 The Best Temtems and how to get them

10 Best Temtems
in the Temtem MMO

Temtem is a newly launched creature-collection MMORPG game that bears a very close resemblance to the Nintendo's Pokemon series. If you are a fan of the latter, you will definitely love Temtem. It's the only real massively-multiplayer online role-playing game that allows you to play a Temtem/Pokemon Trainer who catches and trains the eponymous Temtems, fights with other players and NPC controlled units, complete quests, and trade with other players.

It's a fully-fledged MMO, so in order not to get behind other players, you will definitely want to know what are the strongest Temtems worth training, and how to obtain them in the actual game. Keep in mind, Temtem is still in Early Access phase and is not yet completed. The list below is based on the time we managed to spend online during the first two weeks of the launch, and a lot of information may be missing. We will, however, update the guide in the course of the weeks to give you the most accurate data possible.

Temtems are the eponymous fictional creatures that players collect and train, in order to battle other players and Temtem trainers. Currently, there are 86 unique Temtems available in the Alpha 0.5 version of the game. Temtems are trained by using them in combat, and receive experience points whenever they are on the battlefield when an enemy Temtem is defeated. By leveling up Temtems gain additional Stats which increases their overall capabilities, and after a set number of levels up gained, certain Temtems may evolve into their higher forms. Below you can find all the basic stats of each Temtem:

On top of the beforementioned Stats, each Temtem has its' own Type (or in some cases, two Types). Types determine Temtems strengths and weaknesses against other Temtem Types. Usually, it basically means, you will deal double damage against Temtems that you are strong against or deal half the damage against Temtem types that you are ineffective against (or receive twice as much or half the damage from Temtems you are Weak to/Resistant to). Since some Temtems can have two different types, both will be calculated, so in some cases, you can deal 4x times or 1/4 the regular damage. Knowing all Temtems when you are fighting them, can help you build a strategy that will let you deal with much higher leveled enemies.

There is a total of 12 Temtem types that are listed below:

Important Note:  The 10 Best Temtems listed below have no specified order (from best to worst or vice versa). It is still too early to evaluate them so accurately, and the list is surely going to be updated over the course of the following weeks. We will also appreciate any feedback so that we can improve the list and give you more accurate information.

Below you will find the premiere version of our Top 10 Best Temtems currently obtainable in the game. Enjoy!