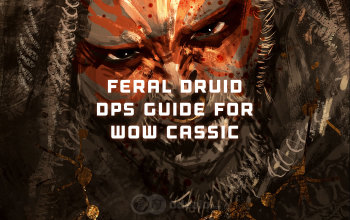 If you have just started leveling your Druid, you may want to check out our Druid leveling Guide first

As a hybrid Class, Druid suffers from the "can do everything but can't do anything up to par" problem. Because of this, Druid in a difficult spot... if he tries to specialize in a single role, he will be outclassed by all single-purpose Classes and will not find a spot in any Raid. This forces Him to embrace His greatest strength - flexibility. Beside great flexibility, Feral Druid provides his Raid with very solid utilities, like Rebirth - the only "real" Combat Resurrection of Classic) and Innervate - one of the best mana regeneration cooldowns in the game. On top of that, he brings Leader of the Pack to the table. This 3% Critical Chance buff offsets Feral's sub-par performance to some extent, at least.

If you can do anything, do it - this is the only way. As a Feral Druid, you have to fill the gaps. You will not top any chart, but you can prevent wipes by making the right decisions (even if this means healing in a Feral spec). Make yourself as useful as possible; this will increase your chances of finding a Raid (and finding a Raid as a Feral Druid can be problematic).

All in all, Feral Druid is one of the most flexible specializations out there. Moreover, it uses engaging rotation, which is rare in Classic. If you are looking for a challenge and don't shy away from the dirty work, Feral will suit you well.

Tauren gets 5% more Health, but Night Elf has a 1% increased Dodge Chance. Both of these Talents are quite good for Feral Druid Tanks, but they do not affect DPS gameplay at all. Neither Race has a Racial that affects DPS directly, but Druid's Shadowmeld makes your Prowl a bit better which helps when soloing and while sneaking around in a PvP environment. On the other hand, Tauren's War Stomp has a multitude of uses in both PvP and PvE (AoE stun can be used as standard CC, as a way of escaping danger, or even as an AoE interrupt). All of the above considered, Night Elf and Tauren are pretty much equal as PvE Feral Druids, so picking a Race over a Faction, in this case, defeats the point (in our opinion, at least).

There is only one profession that makes a real impact in Raids and it is Engineering (Alchemy is also a decent option, but you can buy Flasks, Elixirs, and Potions from other players, which makes it much less impactful). It gives you access to powerful explosives that increase your AoE and Single-Target DPS. On top of that, it lets you create and use Gnomish Battle Chicken Trinket that summons a Guardian Chicken that fights at your side and has a chance on hit to cast a "Battle Squawk" which boosts Melee attack speed of all Party members by 5%, making it a must-have in every competitive group. The fact that Engineering is also considered the best PvP profession is an added benefit to its power in the PvE environment. The second interesting choice is Leatherworking. Although it will not affect your DPS directly, it will enable you to craft some high-quality Druid Items, like Devilsaur Set which is a part of the pre-Raid BiS set for Feral and the Wolfshead Helm which is Best in Slot for Feral Druids throughout all Classic.

If you are interested in Leatherworking and you are still leveling, you should go for it first as it the easiest to skill up while leveling if you also pick Skinning (collecting Leather is very convenient; you are fighting a lot of beasts while questing anyway). Otherwise, you should pick Mining to supplement your Engineering Skill, you can always switch it to another profession of your liking later on.

Proper Talent allocation is essential for maximizing Damage output and/or Survivability. Here, we will describe the most optimal Feral Druid specs and lead you through Talent Trees level-by-level to explain some choices.

There are two competitive PvE Talent Builds for Feral Druids to choose from:

To maximize your DPS, you should aim to assemble the best possible Gear. This applies to both Pre-Raid and each of the Raid Tiers/Phases.

Note: The list will be updated with new items concurrently with the introduction of new Raids/Phases, so remember to visit this page, after the new Raid opens, for an update on what current best Feral Druid items in each lot are.

In Classic, Druid's Rotation revolves around proper resource management. You will take advantage of the Furor Talent and Wolfshead Helm by Powershifting. Remember that you lose all your current Energy when you switch out of Cat Form. This means that Powershifting should be performed at as low Energy as possible and immediately after an Energy tick; the basic sequence should look as follows:

Note1: The pace of your Rotation should rely on your Energy; the order presented below is just a guideline and the real key to Feral's Rotation is the ability to Powershift properly!

Note2: Critical Strikes will affect your rotation thanks to the Savage Fury Talent. Change your sequence accordingly after landing a Critical Strike (always use Ferocious Bite instead of a Shred if you have 5 Combo Points).

Note3: Ferocious Bite should be used at ~35 Energy if possible as it drains all your remaining Energy (it converts excess Energy into Damage, but the conversion is incredibly inefficient and should be avoided).

Please use the following Rotation for sustained Single-Target Damage output: