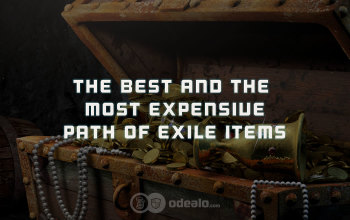 The Best and The Most Expensive Path of Exile Items

Find out what are the best and the most expensive Path of Exile Items. We made two lists for Rares and Uniques

The Best and The Most Expensive Path of Exile Items

We would like to give you two lists of the best and the most expensive items in the Path of Exile. We have decided to make separate lists for both unique and Mirror-level Rare Items. Even though both of them consist of very good and expensive items, the two item types have entirely different uses and characteristics. You should note that Unique Items are far from the best Crafted Rares, and only Legacy double-corrupted Unique Items can get anywhere close to the level of several thousand Exalted Orbs - which often is an estimated price for items offered via Mirror services.

What makes Unique Items so special is usually carrying affixes and special effects that are exclusive only to them, and unavailable anywhere else. Unique Items open up completely new gameplay mechanics and allow certain alternative character builds to be made based on them. This does not necessarily make those items so expensive; how hard it is to obtain them determines their price. Unique Items have a predefined set of attributes on them, and since most of them are global drops, even the best Uniques won't cost a fortune. Obviously, items with perfect rolls can cost several times more than the same base with rolls on the lower end, but still what makes some Unique Items extremely expensive is primarily the difficulty of obtaining them. There are several types of Unique Items which can be found in Path of Exile:

2. Most expensive Rare Items in Path of Exile

Top tier rare items are much more expensive than the best Uniques. The main reason for that is because rares can be mirrored by the owner, and copies can be sold with a great profit. End-game Rares have to be crafted which is an extremely long and expensive process(and highly dependant on luck). Crafting the items listed below cost an equivalent of hundreds or thousands of Exalted Orbs. Not to mention tens of thousands of other low-tier Orbs like Alts/Scours/Regals/etc. consumed in the process. Exalted Orbs and Eternal Orbs (though the latter are less common in crafting nowadays) spent are a long-term investment. The very top items created this way are worth thousands of Exalted Orbs, and selling Mirrored copies can generate 1-200 Exalted Orbs profit for each copy sold.

We have decided to include the price for a mirrored copy on our list, as well as the price for the original, which is usually estimated based on the fee and number of copies sold (assuming the data is any close to the truth).

Keep in mind, while most of the prices for Mirrored copies are publicly available, and a lot of those items are offered on poe.trade, the prices for the original copies are rough estimates. The majority of the listed items are not for sale, and never will be, since they create Path of Exile's history and a ton of profit for their owners.

We are looking forward to your suggestions regarding our listed items. If you believe we have missed something important, or if you think some of those are not fit for this collation, please let us know in the comments below.