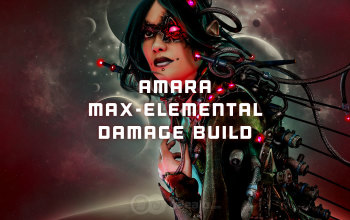 Our Amara Max Elemental DPS Build is among the best Amara Builds at the moment, offering the highest possible burst DPS in the game. Amara's damage is multiplied to extreme levels for a short duration after we use our Action Skill - Phaseslam, which can be even further amplified by Anointed gear that may grant 300% bonus Gun Damage for a few seconds after using Phaseslam. It works wonder when combined with Face-puncher, Cutsman, and Primeval Spectral Phasezerker Legendary Items that make our Melee Damage skyrocket which is utilized by the Face-puncher Legendary Shotgun. Of course, it still remains very powerful regardless of your equipment but utilizing the listed Legendaries allows you to Melt Bosses within seconds, and one shot-most of the enemies when you are buffed. This build, however, can be put in the Glass-cannon category, since it offers mediocre defensive utility, but then again, dead enemies can't harm you.

Below you will find the recommended Passive for the Best Amara Build based on Massive Elemental Damage. While we are using all three Passive Tables in this build, your primary focus should be the Mystical Assault, which grants insane bonuses for a short duration after you use your Action Skill - Phaseslam in this particular case.

While this build can be used with almost any Weapon, with a slightly better performance when using Shock Weapons, to reach its maximum potential several Legendary Items are recommended. The best possible weapon for this build is most likely the Legendary Face-puncher which deals you Melee Damage with each bullet. This makes both Gun Damage and Melee Damage bonuses apply to it, making up for this build's insane burst damage shortly after you use your Action Skill. We further enhance the Damage by using Cutsman SMG which increases our Melee Damage and can be found with very solid Shock damage as well. Primeval Spectral Phasezerker is the icing on the cake in this build, which increases Melee Damage, the level of our core Passives, and instantly generates maximum Rush stacks on using the Action Skill.