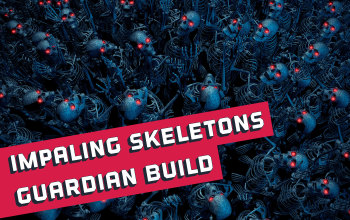 Summon Skeleton is currently among the most popular League Starter Skills in the game. It's a Spell that allows you to summon several Skeleton Warriors for a set duration to fight for you. A single Skeleton isn't exactly the most powerful ally, but you should be able to have around 10 of them summoned at the same time, and with the Vaal version of this Spell, you will be able to summon a big pack of additional Skeletons to help you against Bosses and tougher enemies. Primarily, this build is played with the Dead Reckoning Jewel, which allows you to summon Skeleton Mages instead of the regular melee ones'. While it's generally a better option, you must have that particular Unique Jewel equipped, which may be hard to get find on SSF mode, or simply very expensive during the first days of the League. The following setup requires literally no Unique Items. With a small investment in Cluster Jewels or some inexpensive Items, you will be easily able to farm Tier 16 Maps and Bosses (with further investments, farming Ubers should also be possible but wasn't tested yet). It relies on Skeletons dealing purely Physical Damage with a greatly increased chance to Impale - up to 100% with Cluster Jewels, making them a force to reckon with.

Guardian as a Class plays a strong supporting role in Path of Exile and has Passives that greatly boost the DPS of all your Allies (including Minions obviously) and also ones' that increase your survivability, making it a very well-rounded choice for a non-Spectre Minion Build. It's also just next to most of the Minion-related Passives on the Tree, so leveling up such a character is basically the same as Necromancer. On the other hand, you can choose from a wide variety of defensive Passives and options, potentially giving you better survivability or team utility.

This build also has a more powerful, end-game version, which utilizes full Physical to Chaos Conversion via Triad Grip with 4 White Sockets, and Iron Mass Unique Sword that significantly increases the base damage of your Skeletons and allows them to inflict Withered. This setup requires you to use those two Items, and change the Curse to Despair. Since you won't need the Impale anymore, you will be able to switch  Banner to Defiance one for extra defenses (remember to unlink it from Generosity then).

This is a very straightforward Minion build. You are going to progress through Maps while occasionally casting your Summon Skeletons to have a maximum number of them summoned at all times. In most cases, this will quickly drain your Mana so it's recommended to use a Hybrid or a Mana Flask unless you have gotten some extra Regeneration on your Rare gear. Utility Spells like Desecrate, Flesh Offering, and the Vulnerability Curse can be either triggered by your Wand (most expensive option), or you can use an Arcanist Brand to cast those for you. For the Auras, you should use Precision and Dread Banner linked to Generosity for extra effect, and Determination, Tempest Shield, and Vitality that will boost your own defenses. You might also be able to find an extra Socket (and Mana) for Clarity, to help you with Mana management. When it comes to Guard Skills, it's best to use Molten Shell, as it is simply the best for builds with high Armour Rating as this one.

The leveling phase is basically the same as for a Minion Summoner Necromancer. You can use any of the Minion Spells available - Skeletons, Absolution, Zombies, Spectres, Raging Spirits to deal the damage, while you support them with Auras and Curses. You have very easy access to exact same Minion nodes as Necromancer, so if you are familiar with that playstyle, you should be more than comfortable leveling up as Guardian. If not, you can check the early-stage Passives Trees and some basic Skill Gems setups for the lower levels. While Absolution appears to be the single-best ability to level up with Minions, we still recommend using Skeletons, as they are the Skill that you will be primarily focusing on, so it's best to level up all the corresponding Gems as soon as possible. You can also find some very useful Unique Items listed that shouldn't drain your budget or can be found quite easily on lower levels.

32 Points Skill Tree
Take Spiritual Command, Sacrifice, Enduring Bond, Lord of the Dead, and Death Attunement. Fill in the Life Nodes like Discipline and Training and Heart and Soul whenever you need the extra survivability

63 Points Skill Tree
Get the remaining Minion DPS nodes including Redemption, Righteous Army, and Gravepact. Sovereignty will let you use additional Auras, and you can also grab Devotion for extra Life

Optionally, Harmony of Purpose can be taken if you have any way to constantly hit enemies - like Storm Brand with Hextouch Support to apple Curses and such. It would then offer much better Charge Generation for your Minions, and you would gain Endurance Charges for extra defensive purposes

Below you will find the recommended Items for our Impaling Skeletons Guardian Build. As mentioned earlier, it requires no Unique Items, and the use of Cluster Jewels is optional - they are still recommended, even if with just 1-2 corresponding Passives to limit the initial cost. If you don't have the Cluster Jewels, it's best to pick up additional Life nodes like Tireless or go for Minion defense Passives so that your Skeleton doesn't die so easily against Bosses. It's still recommended to fill those Jewels as you progress with your character.