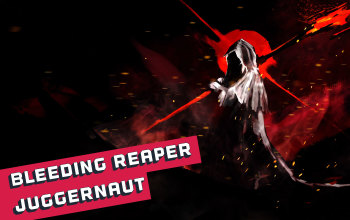 Summon Reaper is one of the most unique Minion Skill Gems, it conjures a very powerful Reaper that uses multiple different Attacks, all of them dealing Physical Damage. The Minion has a 50% base chance to cause Bleeding, and as the damage of this Ailment has been substantially buffed for Minions in patch 3.19, it will be the primary damage type used. Reaper is a Skill designed to be the main damage dealer in any Minion build as it significantly cripples and consumes your other Minions. We will include Skeletons, not to cause any real damage, but to boost Reaper by granting him Feeding Frenzy and Maiming his enemies, which will make them take more Physical Damage. These skeletons will have to be summoned regularly to feed the Reaper, their damage is also good enough to deal with multiple smaller enemies - a quality that one big minion does not possess. Clear Speed problem can be further soothed by equipping Asenath's Gentle Touch Gloves to cause an on-death explosion.

When picking Juggernaut over other classes you're granted an advantage of playing as one of the most durable ascendancies in the game. All the damage here comes from skill gems and gear, especially the Bow/Quiver setup. Picking up a Rare Bow allows your main damage setup to be supported by local modifiers to increase the Gem Level of Summon Reaper, which is by far the most efficient way to gain more DPS. For defenses, the build utilizes very high Maximum Life, over 100k Armour, Elemental Resistances at over 80%, Untiring, Unbreakable, Unflinching, and Unstoppable. You're able to reach an insane amount of Life Regeneration, 7 Endurance Charges, capped Chaos Resistance, and Immunity to all Elemental Ailments. If you want to be extra stout, allocate Indominable Resolve via Forbidden Jewels to take 25% less damage on top of all previously-mentioned virtues. This absurd sturdiness completely justifies relatively low damage and not-so-optimal clear speed.

Summon Skeleton as you go, these will deal with most of the obstacles presented to you. Reaper has some AoE Attacks, and you can also control him which is certainly helpful. For boss fights, you can deploy Vaal Summon Skeletons for more damage and to protect yourself. Replica Maloney's Mechanism is used to automatically cast Ensnaring Arrow, enemies affected by it take more damage. It will always Hit due to Resolute Technique. For Curses use Temporal Chains from Asenath's Gentle Touch or Vulnerability. It's possible to have both via anointing the Amulet or by equipping a specific Rare Body Armour. For a Guard Spell use Molten Shell. Flame Dahs is good as a movement ability. For Auras, we've used Pride, Determination, Purity of Elements, Skitterbots, Flesh and Stone, and Malevolence. You're only able to fit all of them if you have Aul's Uprising (Pride/Determination variant), Enlighten Support, and Malevolence linked with Divine Blessing while also using The Devouring Diadem for Eldritch Battery.

Leveling might be difficult, there are no Minion-related nodes nowhere nearby your starting location. Even later on, most of your damage comes from high-level Skill Gems rather than passives or items. There are a few Skills that connect the Minion and Strength-based character archetypes, these are Absolution, Domination Blow, or Herald of Purity. Start with a Ground Slam, and play as a regular Attack Build. You can carry on like this until maps, but to transition into a proper Minion build as early as it's possible, start using Domination Blow at level 28. You can then allocate Gravepact, Retribution, and other such notables for more Minion Damage. Start using Pride and Herald of Purity for more Physical Damage and Minions. These minions are short-lived and depend on you starting the chain reaction to set them all up, so investing in your own Attack Damage is also something to keep an eye on. Reaper requires level 28 and you can start using it alongside your other minions as soon it's possible. Minions Damage over Time should grow over time as you progress through maps.

The build does require some more or less expensive unique and rare items. Replica Maloney's Mechanism and the Devouring Diadem will be necessary. You could also equip two Cold Iron Point Daggers, but it would leave you with fewer sockets, links, and more clunky gameplay for slightly more damage. To gain more Damage you will need to increase the Gem Level of Summon Reaper, and gain some Minion DOT modifiers from Jewelry and Jewels. You should be able to apply two Curses by anointing Whisper of Doom or a specific Hunter's Prefix on a Body Armour. Aul's Uprising can be used to cast Pride or Determination for free (it can also be used for Purity of Elements or Malevolence, but that's inefficient). Gather Armour, Maximum Life, Chaos Resistance, and Elemental Resistances - these are the most basic and common defensive layers, a foundation of your survivability. Rare items are generally cheap, but you can spend a lot on a good Bow or multiple Ghastly Abyss Jewels.