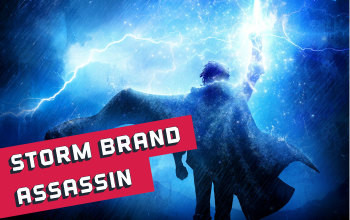 Assassin is an ascendancy class that specializes mostly in Critical Strikes, it enhances the effect of it, grants bonuses, and has some strong synergies with Power Charges. Brands are typically associated with the classes on the upper side of the Passive Skill Tree - namely Hierophant, Elementalist, and Assasin. The Critical Strike mechanics can be really pushed to its limit in this build - your character is stacking Power Charges, up to 10 or maybe even more of them. Take Deadly Infusion and Mistwalker from your Ascendancy Skill Tree for some great Scaling with Charges. You will need two Void Batteries and a Badge of the Brotherhood - it's a trademark of all Power Charge-reliant builds. Now with 10 Frenzy Charges, your Cast Speed and Damage will skyrocket.

Storm Brand is a simple Brand Spell that attaches to an enemy and deals Lightning Damage in fixed intervals to the opponent it is attached to, and the surrounding enemies. It's possible to have up to 5 or 6 Brands, two of them on one opponent at a time, so when fighting with bosses, the best configuration is to have three enemies two or there that can host your Brands and strike the neighbors. It's a Hybrid build - it uses Life and ES to stay alive, allocate Corrupted Soul with Glorious Vanity for more Energy Shield. Your combined Life pool should reach 4k to 5k, that's not terrible given your constant Elusive buff. The damage of this build is really great, with the Brands automatically attaching to the enemies it has also great clear speed. The downside of this build is its price - it isn't a good league starter, the items are quite expensive so keep that in mind.

Path 3.16 has not changed this build much. There is no need to use Transcendent Flesh as there is no preferable socket within your reach. We swapped Herald of Thunder for Hatred to increase the damage. You're no longer able to get the Light Eater Notable from the Thread of Hope so if you don't have any Spell Damage Leech you will have to spend three points instead of one to get it. Your Energy Shield is now more potent, and your Maximum Life is relatively higher.

There aren't many Active Skills, Storm Brand is obviously the one to be used frequently, do deal with bosses and smaller foes. it's a good idea to link the Hydrosphere with Hextouch, Hydrosphere's Drench and Conductivity will significantly lower the Lightning Resistance of your opponents. Brand Recall can be used to summon all your Brands to your location with an increased attachment range. Use Flame Dash as your Movement Spell. It's a good idea to have your Immortal Call linked with Cast when Damage Taken on the lowest possible level. To increase your damage for a short duration use Vaal Righteous Fire.

Start by using Brands right after level 12, before that, you can use any Lightning Spell such as Arc - you will need to increase your Spell, Elemental, or Lightning Damage. These mods are very common and easy to find, even early on. For Critical Strike Chance use Essences of Scorn on your Shield or Weapon, Essence of Torment adds Lightning Damage to Spells, while Essence of Woe increases your Spell Damage. Vendor recipes could be useful early on to craft a magical item with just one mod that suits you. By level 68 you should be able to equip Void Batteries and Badge of the Brotherhood and by that point, your Maximum Power Charges should be 9 or 10.

Two Void Batteries and Badge of the Brotherhood are obligatory uniques. The Amulet is moderately expensive, not as expensive as it used to be, the price of other uniques should be low - Asenath's Gentle Touch or six-linked Inpulsa's Broken Heart are optional, but their price is valued at around a few Exalted Orbs. The Rare Helmet is required to have a mod for +1 to Maximum Power Charges. There should be no problem with Attributes, the required Intelligence is easily obtained, Strength might be a problem if you want to level up Gems like Increased Duration Support. Generally, you should seek Critical Strike Multiplier and Chance, then Lightning Damage and Cast Speed. For Defences, you will need Maximum Life and Elemental Resistances, Maximum Energy Shield is also used, but it shouldn't be prioritized over Maximum Life.