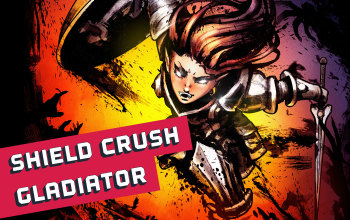 A Duelist build that uses the Shield instead to deal damage. The newly added Shield Crush Skill allows you to scale in a new way

It is a heavily defense-oriented build for a Gladiator that uses a Skill Gem Shield Crush. It's an Attack with a built-in base flat damage and added more physical damage per Armour or Evasion Rating that's in your Shield. That's why having a  lot of Armour on your Shield is one of the most important factors that add to your total damage. The highest amount of Armour you can score on a Shield is around 3500, but realistically it will be around 2000. With 4 to 6 added Physical Damage per 15 Armour, it will be something like 530 to 800 added Physical Damage to Attacks, that's over ten times more than Abyssus Unique Helmet. With the rest of your gear oriented to deal more Physical Damage, added Impale, and other such modifiers this build can be very tanky and have a huge DPS at the same time.

The build has a very high Block Chance as it is a popular defensive mechanism for Gladiator builds. Maximum Life at the build completion should be around 7k. Combined with high Armour and Fortify this build can face tank all the Attack Hits in the game. Offensively - you should rely on the Armour that's in your Shield and Physical Damage with Attacks. The build is mechanically the most similar to Lacerate, here however you're not dealing damage with your weapon. Use Resolute Technique to never have your attack be Evaded and not to worry about Accuracy Rating. Additionally, Impale mechanics will be used - combined with high Attack Speed and Attack Damage its damaging potential is enormous.

Use Leap Slam to travel and Shield Crush to fight. Your other Skills are Ancestral Totems to boost your Melee Damage and Attack Speed - use them occasionally when you're fighting with a boss or in a small area. Blood Rage should stay enabled at all times - remember to turn it on as you enter a map and during longer fights with one enemy.

Shield Crush can be used right from the start - use it combined with a Shield that has high Armour, the weapon doesn't really matter as the modifiers are usually local but you can look for a mod "Attacks have a chance to cause Bleeding" or other such mods being global, not local. Equip Prismatic Eclipse at level 53 with 3 green or two green and one blue socket if you don't have any Mana Leech - this weapon will be used in the final version as well and it will be the only required unique item. Before that, use Redbeak Unique Sword with Petrified Blood Skill Gem. You can use Essence of Dread on your Shield for more Armour.

By far the most important here is the Armour on your Shield - your damage relies on it so aim for as much as possible. Secondary to that is of course Life - your main layer of defense, and Elemental Resistances until capped. Seek Armour to mitigate Physical Damage and Chaos Resistance. The weakness of this build is DoT - try to avoid this type of damage. To gain Bleed, Poison, and Ignite immunity modify your Flasks. With a high Block Chance from your Skill Tree, you should be able to sustain a lot of damage. The gear is really basic with no need for expensive mods - it should be overall really cheap.

Using this opportunity, we would love to invite you to visit our Path of Exile Marketplace where you can buy cheap PoE Currency in case you can't afford all the items for your character. You can find