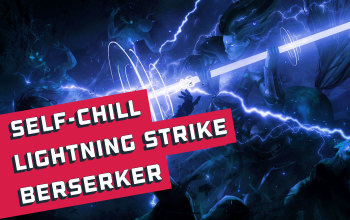 Self-Chilling is a very unusual, yet powerful, mechanics offered by the Unique Winterweave Ring. It allows you to reverse the effect of Chill when applied to your character, which will now increase your Action Speed instead of reducing it. This allows characters like Berserker to reach tremendous swiftness even without wearing a Headhunter Belt and hoping to get its' Haste Aura. On top of the reversed Chill with increased effect, the Berserker class generates Rage which greatly increases your Attack Damage, Movement, and Attack Speed. Min-maxed characters of this type can reach even over 400% Increased Movement Speed, which combined with Lightning Strike's solid AoE and DPS (partly, thanks to the effect of Rage again) makes it one of the most enjoyable and fastest Map farming builds out there.

In order to consistently Chill your own character, you are going to use Maligaro's Restraint Unique Belt and Cold Conduit Passive from a Medium Cluster Jewel. The Belt reverts the Shock you Inflict to enemies to yourself, and the Passive causes targets - including yourself - Shocked by you to be also Chilled. To sum it up, whenever you Shock an enemy, you will also Chill yourself. To mitigate the negative effect of Shock, it's mandatory to use Inpulsa's Broken Heart so that you don't take extra damage from the Shock inflicted.

From the "playstyle" perspective this build is just a typical Melee build that just benefits from greatly increased Action Speed. Lightning Strike offers decent clear speed thanks to hitting additional targets further away by creating extra Lightning Projectiles that will always hit their targets if your primary Attack doesn't miss. For the defenses, this build utilizes a moderate Life pool, Life Leech, Endurance Charges, some extra Physical Damage mitigation from Armour - overall this should be enough to farm most of the content, but it's the most sturdy character out there. It's safe to say that this build's offense is its most reliable defensive mechanic.

You should be also looking to level your Cold and Lightning Damage dealt with Lightning Strike so that you can use Trinity Support which is the best Gem DPS-wise for builds that can deal the highest damage of two different Elements. If the damage is nearly on the same level, sometimes the highest Hit can roll to have the highest damage of the Cold Element, generating Fire/Lightning Resonance, and at other times the Hit may deal more Lightning Damage and generate Cold and Fire Resonance stacks, greatly boosting your DPS.

Leveling up with Lightning Strike is quite smooth as the skill itself offers decent AoE and hits multiple targets from a distance. You may need to get some Dexterity on your Items (or allocate Versatility and Precision quite early) to equip the Skill Gem as it's based on Dexterity. You can use Lightning Strike with any weapon of choice, but since Staff-oriented Passives are the closest to Marauder's starting Point we recommend using them (remember that during the first levels it's completely irrelevant what weapon you use - just aim to get a Staff when you start allocating corresponding Passives for them). Below you will find some basic leveling Gem setups and several useful Uniques that are accessible on lower levels.

We recommend killing all the Bandits for two additional Passive Points. Helping Alira is also a good option if you want to min-max your build at higher levels for the extra Crit. Multiplier

In this section, you can find the recommended equipment for this build. Sadly, it doesn't offer much flexibility as is requires a bunch of specific Unique Items; which also determine the stats that you need to find on all other equipment pieces.

Using this opportunity, we would love to invite you to visit our Path of Exile Marketplace where you can buy cheap PoE Currency in case you can't afford all the items for your character.