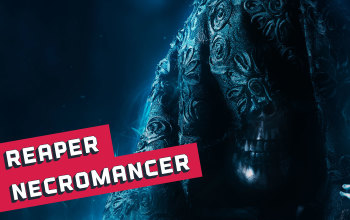 Patch 3.15 introduced a new Skill Gem that's supposed to have a heavy impact on the Necromancers meta. Summon Reaper is a Minion that deals Physical Damage, you can command him to perform a Dash-Attack. Another special aspect of it is that you can have only one Reaper at all times, the Reaper weakens your other Minions and can consume them to heal and empower himself, making it obvious that you should center your build around him rather than using him as an addition to a casual Minion Build. Reaper offers one of the most unusual Minion playstyles, which till now was based on leading an army of other Minions that did crazy stuff all around your screen, making it harder to control. With Reaper, it is the complete opposite, you are going to focus on boosting a single Minion that should deal massive damage and clear all the content on its own. Because of its characteristics, you are still going to summon other Minions, but most likely in order to boost your powerful Reaper or provide other utility bonuses.

This build is a pure Physical Version - your Minions, empowered by Brutality and Impale, with already increased chance to Bleed and increased its effectiveness is the most obvious way to play this build. The version presented here also uses Aspect of the Avian and Saqawal's Nest for more damage. A lot of damage comes from Cluster Jewels - the build will benefit a lot from Notables such as Rotten Claws or Renewal. These Jewels can get ridiculously expensive so the guide will consist of two Final Skill Trees - one version with no place for Cluster Jewels, and one with Cluster Jewels socketed in. Your main line of defense separating you from dying is your Life Pool - seek to increase your Maximum Life to a point of 6k. With Steelskin, Fortify, High Block Chance, Armour, instant Enduring Cry, and Minions taking the hits for you, the character is really hard to kill.

This build can be compared to a standard Life Minion build, but instead of summoning plenty of Minions, you will be using one powerful Reaper that will deal significantly more damage. You will be required to constantly resummon other types of Minions, but for the purpose of utility buffs and feeding your Reaper to boost his stats and heal him. Your main role is still going to be boosting your Reaper via Auras, Curses, Offering Spells, and increasing your own defenses to stay alive for example by having instantly cast Enduring Cry while Reaper reaps through the content. A single Reaper is not that good in dealing with a lot of enemies at once, it's good with killing Bosses and Rare opponents in a single hit of his manually casted skill. To deal with trash enemies you should use Skeletons - link them with Feeding Frenzy Support to make them aggressive. Skeletons will serve additionally as an empowerment source for your Reaper.

You can start leveling using your Summon Skeletons, you'll put your points in generic Minion nodes on the Skill Tree anyway. Your Defense will consist of Maximum Life so don't ignore this stat. There are Unique Items that will help you during the leveling process, most of them are listed below. Summon Reaper can be equipped at level 26, before that you have to really on Skeletons. Use Essences of Fear to quickly craft an Item with Minion-boosting mods.

As with most of the Minion builds - your focus will lie on increasing your Minion Damage. Reaper doesn't use Spells, just Attacks, so increasing Minion Spell Damage is pointless. To stay alive seek Maximum Life and Elemental Resistance mods, your Body Armour, Boots, Gloves, and Jewelry are the primary source of these stats. The Helmet is an important part of the Necromancer's gear - you can find useful mods there that will increase the damage of socketed Minion skills. This build requires around 240 Intelligence and 110 Dexterity - look for these Attributes on your gear. There are no Unique Gear parts that are necessary for the build to run - it makes the build cheap to assemble, but expensive to min-max.