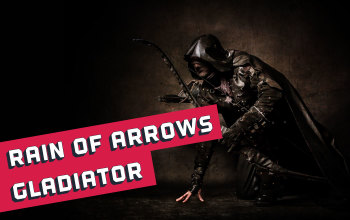 Rain of Arrows build for Gladiator. It's a Bow-based Crit build that uses Bleed mechanics to its full potential

Rain of Arrows has a very high base amount of fired Arrows - 21, allowing you to easily stack Bleeding on enemies thanks to Crimson Dance Keystone. Gladiator Ascendancy is one of the most suitable for Bleed builds - Blood in the Eyes and Gratuitous Violence boost your damage with Bleeding by a lot while forming a small defense layer as well. Your damage comes mostly from attacking Bleeding and Maimed enemies and with a huge number of Arrows and the amount of Attack Speed - it is really effective. The Bleed-based Bow Gladiator builds had their peak of performance previous patch, before the rework of Elder Bleed-related mod. Right now the best Elder Mod for Bow for this build is "59% to Damage over Time Multiplier for Bleeding from Hits with this Weapon", previously you had a 60% chance for bleeding to deal 100% more damage, and given that if the enemy has already the maximum number of Bleeds, the highest amount of Bleed damage will replace the lowest one - the damage output is lower but only for the boss fights with high-end builds with a lot of Attack Speed. For the same reason, Ryslatha's Coil is a heavily recommended item.

It's a solid build in both - offense and defense aspects. It mostly consists of rare items with generic mods with increasings for stats such as Physical Damage, Attack Damage, Bow Damage, and Critical Strikes. The Bleeding plays a big role but to assemble the right gear is not rocket science. The reason for picking Gladiator over Ranger is its synergies better with Bleeds and the fact that it's slightly more defensive-oriented. Your offense will come in a form of easily achievable stats to be picked up from your skill tree and gear, there is no complex mechanics involved here. The defense of this build comes in a form of Chance to dodge Hits and Maximum Life. The chance of not being Hit will oscillate around 50% with the Wind Dancer Keystone, and the Maximum Life should be around 5k.

Use Dash to move between packs of enemies and fire your Rain of Arrows as you're in the middle of the pack. By staying close to your opponents while attacking you deal much more damage thanks to the Point Blank Keystone and Passives from Cluster Jewels. Have your Blood Rage constantly activated and use Vaal haste when needed (mostly against Bosses). For the most part, you should be able to ignore incoming damage, but against end-game Bosses, you surely need to avoid their AoE effects and high damage spikes because of the relatively low Life pool. This build offers a standard Bow/Ranged playstyle but truly shines in Melee ranged because of insane damage bonuses.

The build is really flexible, especially in the early stages of the game so feel free to use any attack Gems, but later you'll have to switch to some Bow Attacks like the Skill that'll be used in the final setup - Rain of Arrows. Look for rare gear with increased Physical/Attack/Bow Damage. Remember to switch to better Flasks and to keep your Elemental Resistances high.

Below you will find the recommended gear for this build. The build is simple but there are many mods that you can look for. With the fairly cheap gear, you can do Tier 16 Maps with no issue whatsoever. There are no required Uniques and the most important ones are Jewels that solely save you a bunch of Passives but are completely optional. In terms of equipment, it's a very flexible and simple build that should be fully viable even on the solo self-found mode.