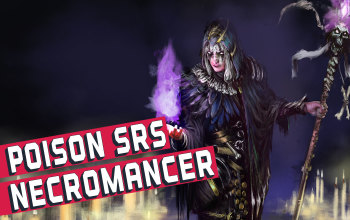 Recently, DOT Minion builds experienced a surge in popularity due to some major buffs, which resulted in Poisonous Minions being one of the most powerful choices for Necromancers. Raging Spirits are the Minions to be summoned in bulk - you can have up to 20 of them. They have only one basic Physical Melee Attack that doesn't have any inherent peculiarities, but with some Ghastly Abyss Jewels and the United in Dream Sword, these Attacks will have a 100% chance to Poison on Hit. You will use other Minions as well, for Feeding Frenzy and other small bonuses. These are Specters, a Stone Golem, and Animated Guardian. The damage here comes from Passives, Items, Cluster Jewels, Skill Gems, and their level. The rest of the resources will be spent on the character to increase its defenses.

The build uses some expensive Unique and Rare Items such as The Covenant, Aul's Uprising, Aegis Aurora, and Amanamu's Gaze. It's definitely not cheap but compares better to other Necromancer Builds with its several millions of DPS. It can be also run on a budget with minimal investment, but that, of course, means much worse performance. Raging Spirits are short-lived as these will last for around 12 seconds. Cast Speed is not important for this build, there are other matters to focus on, so using Unleash Support will be mandatory to reach the 20 Minion Limit. However, Haste Aura for Cast Speed for the character, and Attack Speed for Minions will be very useful. For defenses, it uses mostly a big pool of Maximum Life, around 4 to 5k of it, very high Spell and Attack Block Chance, Life Regeneration, Spell Suppression, and Armour.

As a Necromancer, you won't rely solely on Raging Spirits. Use Stone Golem to regenerate Life, Spectre, and Animated Guardian for various bonuses such as Proximity Shield, Feeding Frenzy, and Meat Shield. To actively boost stats use Despair Curse for added Chaos Damage, Bone Offering for Block Chance, and Desecrate to create Corpses. These will be cast with a single Arcanist Brand. For a guard Spell use Bone Armour, and for a movement Skill - Flame Dash. For Auras, we recommend Envy (from Item), Determination, Tempest Shield, and Vitality. Haste will be cast off-charge via Aul's Uprising. Malevolence is a temporary Aura activated with Divine Blessing.

Pick the Summon Raging Spirit Skill Gem at the start of the first act and use it throughout the rest of the game. You won't be able to easily cause Poison at the start, so focus on other types of damage. Minion Instability is a great option, Minions will explode when low on Life, dealing Fire Damage based on their Maximum Life. It can be combined with Tavukai Amulet or Infernal Legion Support Gem. Don't allocate it if you want your Minions alive to deal Physical Damage with Hits. Use Triad Grip Gloves at level 32 to Convert Minions' Damage to an Elemental type, or keep the Physical type. Whichever type of damage you select it should be easy to level up a Minion Build, just be sure to use Zombies and Spectres alongside your Raging Spirits. You can use Auras like Pride, Anger, Hatred, or Wrath to boost the respective damage type, and Curses such as Vulnerability, Flammability, Frostbite, or Conductivity. At level 38 you can start specializing in Poison with Severed in Sleep Sword, and from this point, forming the proper end-game version of the build.

There are some Unique Items that are nearly necessary, some of them expensive. To make this build work, the bare minimum is achieving a 100% chance of Poisoning for Minions, which is easy. Severed in Sleep or the upgraded United in Dream provide 60%, and this weapon is cheap. The rest 40% can be acquired from three Ghastly Abyss Jewels, or two if socketed in Darkness Enthroned. For more Damage, seek modifiers to Minions' Attack Speed, Damage, and Gem Level of Raging Spirits. Damage over Time or Poison Damage would be the preferred damage type, but added Chaos or Physical Damage is also great as these can affect Poison. For survivability, go for Maximum Life, Resistances, Spell Suppression, Block Chance, and Armour. You will need 155 Strength, Dexterity, and Intelligence, which might be hard to get.