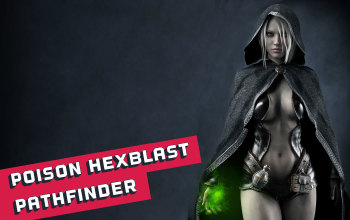 A unique approach to the Poison archetype, stacking the power of single Poison for a great clear and single target in one skill

Poison is a Damaging Ailment that is usually associated with a flurry of smaller Hits, each applying smaller instances of Poisons that eventually lead to a very high Damage over Time effect. It offers immense Single target Damage but usually lacks the upfront Damage which is very noticeable during regular Mapping. However, this Build has a completely different approach to Poison Ailment. Instead of many smaller Hits, we opt for a powerful single blow that inflicts powerful Poison on enemies. We are doing it by using Hexblast Skill. It's a very impressive Spell that is naturally connected to the Hex Skills. By manually applying Hex such as Despair on the enemy, it will gain Dooms stacks over time, increasing the effectiveness of the said Hex. By default, Hexblast is a rather weak Spell that Hits a single enemy, but if you cast it on a Hexed enemy, it will deal massively increased Damage in a larger radius, depending on the amount of Doom generated on the enemy. With proper Items and Passives, it can lead to up to 150% More Damage with Poisons, which is absurdly high Multiplier.

The main feature of this build is Low Tolerance Notable found on Medium Cluster Jewel. It offers a 300% increased Damage with Poison we apply to the non-poisoned enemy, and we can use a multitude of them. In this Build, we use 6 such Jewels and one Mastery in Passive Tree with the same effect. In the end, it grants an insane 2100% Damage increase with a single Poison. We also use a newly introduced Skill, an Alchemist Mark, to more than Double our Single Target Damage. This Mark creates a Caustic Ground based on the single Poison applied to the enemy, in a similar fashion to Burning Ground created by Flame Surge used on Ignited enemy.

Another thing that works greatly with this playstyle is Pathfinder's Poison Proliferation. It spreads the single strongest Poison from the killed enemy to all nearby monsters. This single Ascendancy Passive grants us very strong and satisfying clear capability on our single target-focused skill.

With all those amazing Damage scaling mechanics, we can invest a lot into our Defences. Although this build has a pretty low maximum Life, it is still very tanky. It's all thanks to capped Spell Suppression, high Evasion Rating to evade most of the incoming Attacks, and high Armour Rating to reduce Physical Damage.  We also use Purity of Elements, which helps us with Elemental Resistances and takes care of all Elemental Ailments.

Before you start this build, you should have enough Currency to buy the required Cluster Jewels. Other than that, this build is rather cheap to get started, and you can invest more and more as you progress through the end game. This Build offers amazing scaling, making every small upgrade you make matter.

During regular mapping, all you really need to do is to cast a single Hexblast into packs of monsters and quickly move around enemies using Withering Steps. With high enough Damage, you don't really need to bother with casting Hexes and gaining Doom. Divine Blessing turns one permanent Aura into a temporary buff, which you will have to cast from time to time to get a massive Damage bonus. To get maximum Damage for bosses you will have a bit more to do. You will have to cast both our Curses and put down the Wither Totems.  It is a bit of extra casting, but in return, every Boss will melt in seconds!

Leveling with this build is fairly easy, but because we use a lot of Jewels to scale our Damage, we recommend getting some extra passive skills during leveling and respec them later on. You can start by using Blight until you get Hexblast and Bane in Act 3. Your Poisons will be quite weak at first, but DoT effect from those Skills should be enough to smoothly go through the campaign.

Major God: Soul of Lunaris: 1% additional Physical Damage Reduction for each nearby Enemy, up to 8%; 6% reduced Elemental Damage taken if you have been Hit Recently

This build has some mandatory Unique and Rare items to work smoothly. We use Ralakesh's Impatience to generate Frenzy Charges, and then use Olesya's Delight to turn them into Affliction Charges.  By doing so, you will keep them upon movement, as the Unique modifier from those Boots refers to losing Frenzy Charges only. Apep's Rage grants an insane amount of Damage for this build, and since we use Eldritch Battery to cast skills, losing 40 Mana upon casting a spell doesn't affect us at all. Most power of this build comes from Rare Jewels. To get even more Jewel Sockets, we utilize pair of the Voices Unique Cluster Jewels. You need to have Low Tolerance Notable on every Medium Cluster Jewel. You will also need 3 Jewels with Septic Spells Notables on them, in order to get a 100% chance to Poison with Spells.  On the remaining 3 Cluster Jewels, you actually don't need any Notable except for Low Tolerance, as other Notables offer less Damage than getting additional maximum Frenzy Charges on the Passive Tree. With the amount of increased Damage we have for our single Poison, other modifiers simply pale in comparison. If you really cannot afford to get one with both of those Notables, you can use Divergent Herald of Agony instead of one of your Defensive Aura, but it is not recommended in the long run.  On your Rare Jewels, you will get a lot of maximum Life and Chaos Damage over Time Multiplier. You can also get other useful modifiers there, like Elemental Resistances, Attributes, or even more Damaging modifiers.