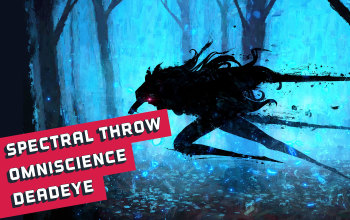 Spectral Throw is a type of skill that can be played in many different ways, it's very basic in nature which allows you to shape it however you want. It's a standard Projectile Attack that requires you to have a melee weapon. You throw a copy of it to pierce all the enemies in its way before returning to you. The most optimal distance between you and the opponent is when the Projectile slows down to a halt and changes direction, it's when the enemy can be hit multiple times. Projectiles can't Chain of Fork, so the only way to upgrade the clear speed is to have an increased number of Projectiles. One of the more expensive archetypes of Spectral Throw is to use it with Crystallised Omniscience Amulet, Secrets of Suffering Keystone, and Trinity Support as is the case in this guide. It requires a lot of Attributes and a diverse range of added Elemental Damage mods, but it's the best-performing option for this build.

Taking a Deadeye is a good choice because of its great Keysones - Endless Munition for additional Projectiles, Far Shot, Focal Point for enhanced Mark Skills, and Gathering Winds which grants you permanent Tailwind and Gale Force stacks. With Trinity Support you will have to deal at least two types of Elemental Damage, it can be easily achieved by getting a proper weapon, but if you can't afford it, you can use many different Support Gems and Aura Skills. It's a Critical Strike build that also uses a Claw, making it particularly good with Nightblade Support Gem for extra Elusiveness. The defensives are really good - the character has over 4k Maximum Life, around 15k of Armour and Evasion each, Ghost Dance with some Energy Shield, very high Spell Suppression Chance, and mediocre Attack Block Chance.

The build uses only Spectral Throw as an Attack, it's a skill that requires some positioning and fast movement for its full potential so it takes some practice to master it. You can also benefit from having a Tornado or Hydrosphere for various utility bonuses, such as Power Charge generation. For a Curse use Sniper's Mark and Enhance it for more Quality, it's responsible for almost half of your total damage. For more Attack Speed deploy an Ancestral Totem for more Attack Speed. Your Guard Spell should be Molten Shell, and for a better movement use Dash. We've used Auras such as Determination, Grace, Defiance Banner, Precision, and Herald of Ice.

It is recommended to use Spectral Throw right from the start. You can also use a Bow with some sort of Elemental Skill like a Galvanic Arrow or Ice Shot, but after reaching the Claw Cluster you will have to switch. Start with increased Damage and Maximum Life, after the first few acts try to convert your Physical Damage into an Elemental one (Cold Damage is the easiest one to convert into), or acquire a Claw with high "added Elemental Damage" at a cost of low Physical Damage. After Maximum Life, prioritize Evasion Rating, then Spell Suppression Chance. to increase your Damage equip Crystallised Omniscience, and begin stacking Attributes. The final step is to get more Critical Strike modifiers. Trinity Support has to be included after you're able to generate Resonance stacks and no sooner.

Crystallised Omniscience is the core element of the build, forcing you to completely change your view on equipping a character. Instead of focusing on Elemental Resistances, focus more on Attributes, especially Dexterity. The most important stats increasing your Defensives are Maximum Life, Attributes, Evasion, Spell Suppression Chance, and Armour. Try to get as much of them as you can. Especially Attributes, these will also make you penetrate Elemental Resistances. For more Damage get the Critical Strike Chance and Multiplier. Attack Speed and Added Elemental Damage will be important too. It's an Expensive build due to the abundance of modifiers you can profit from, and from the fact it consists mostly of Rare Items, and the Unique ones are very expensive. The Unique Flasks and Jewels are extremely good, but not mandatory. The most important asset is your weapon, it needs tons of added Elemental Damage.