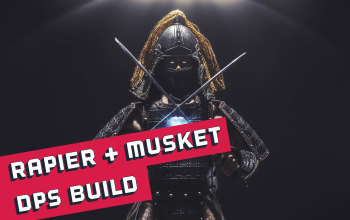 Rapier is one of the best Weapons in New World and its bleed effects are among the strongest DoTs in the game. However, there's (and there has always been) a problem with DoT effects. Mainly, the fact that some of their damage is often wasted, as targets tend to die before DotS have the time to deliver all their damage ticks. Luckily, Rapier offers a very simple and extremely deadly solution - an ability to turn bleeds' damage over time into burst damage.

Our "Highwayman" Rapier/Musket Build focuses on maximizing single target DPS. It does that in three ways. Firstly, it relies on Musket to open fights with a deadly burst damage sequence of Power Shot, followed by Powder Burn. Secondly, it transitions to the melee stage by Trapping the target and using the 20% Trapped Damage bonus to maximize the damage of Rapier's Tondo and Flurry. And thirdly, it tries to finish the fight off by applying the 2nd and 3rd stacks of Tondo to consume them with Flourish and Finish for a massive burst of damage at the end.

You can also check our other  New World Builds