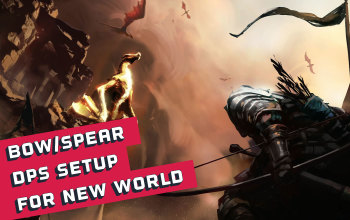 In longer encounters, sustained damage always beats burst as a fight longer than a couple of minutes is a marathon, not a sprint. On the other hand, burst damage beats sustained DPS in solo content. Thus, one might think that he should focus on one of these, depending on the type of content they enjoy. However, doing so will result in a hyper-specialized build that excels at one thing but is sub-par in all other aspects. This is why we've decided to combine Burst Damage of the Bow with Sustained Damage of the Spear to create an all-purpose PvE build.

Our "Huntsman" Bow/Spear Build focuses on powerful damage over time effects, coupled with high crit chance and a nice cooldown reduction. As a result, it is capable of delivering a deadly mixture of burst and sustained damage. Thanks to a mix of a ranged and a melee weapon, it is also very versatile - you can spend half of the fight in melee and don't lose out. For the best efficiency, we recommend opening with the bow as doing so will apply DoTs and deal high burst damage (aim for the head). Then, switch to the spear to keep the damage up. In longer fights, switch back to the Bow to re-apply DotS and debuffs. Also, if there are multiple enemies present, consider holding on to your Bow's AoE cooldowns - use them after the tank groups up the mobs.

You can also check our other  New World Builds