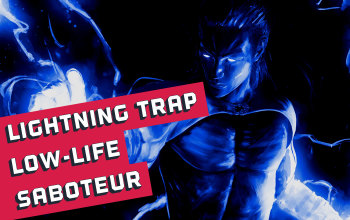 This is an end-game version of the previously published Lightning Trap Starter build. The main difference between the two is the price and the performance. As you play the Life version of this build at some point you'll lack in defense due to the absence of Life nodes on the passive skills tree. It's especially a problem as you play Lightning Damage Trap build - maximum Life is plentiful on the Left side of the Skill Tree, however, there is an abundance of are Energy Shield nodes nearby. With the right gear, it can be considered one of the tankiest builds in the game. It also makes use of Pain Attunement Keysonte - links Arrogance Support Gem with additional Aura to reserve your maximum Life and gain 30% more damage.

The potential of the build goes really high. You can find additional Support Gems as mods in Shaper-influenced Gloves and link it with one of your Traps. For Defenses, this build uses Energy Shield, combined with Shavronnes's Wrapping, Presence of Chayula to achieve more than 6k of ES, combined with a high chance to Block Hits from Attacks and Spells, and a lot of Chaos Resistance, your Evasion Rating and Armour are exceptionally high. The sheer number of modifiers that you can make use of makes this build great for players striving to constantly upgrade their items. You can get as much as 10k ES and over one Million DPS.

Use Lightning Trap to deal with trash mobs commonly found in the maps, and Flame Dash to make the exploration of them faster. To kill bosses, use Wave of Conviction with Awakened Hextouch - to apply Assassin's or Sniper's Mark and Conductivity. It will Cripple their Resistances and make them more susceptible to damage. When fighting with bosses use Bear Trap to immobilize the target and make it more vulnerable to other Traps. Sigil of Power is useful in such situations too.

You can't level an ES-based build as it is, first you need to play a Life build, and then change to Energy Shield. A guide on a starter Lighting Trap Build has already been done and you can find it here. Follow the instructions, and around the time you start mapping and you have the gear, proceed to transition.

The initial step to completing your gear setup is to cap all of your Elemental Resistances at 75%, after that's done you can seek other defense stats, the one that's the most important is Energy Shield. Your High Block Chance for Spell and Attack hits will come mostly from a Skill Tree, but you can commonly find these stats on a Shield. To increase your Damage you should seek Lightning, Spell, and Trap Damage, and additionally Critical Strike Chance and Multiplier. These stats are often present as weapon's mods, Sceptres or Wands are the weapon bases with the most of these. Additional stats worth looking for are Amour, Evasion Rating, Chaos Resistance, and Mana Regeneration.