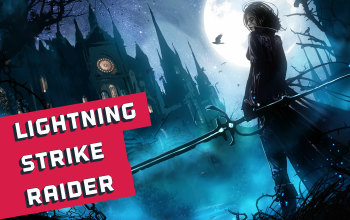 Lightning Strike is an Attack that can be performed with a melee weapon that converts a portion of your Physical Damage to Lightning Damage and fires Projectiles to Hit your enemies later. You will use it with Trinity Support and a Claw, the reason for this is an excellent synergy a Raider has with Elemental Attacks, and a huge variety of Added Flat Elemental Damage Affixes you can find on a Claw, their high base Crit Chance, great passives near your Starting Location, and Life gained on Hit Implicit mods. Trinity Support Requires you to have a somewhat equalized amount of each of the three Element's Damage you will be dealing - you can't use only one type of Elemental Damage because you won't create Resonance stacks. The most important stat to look for is a Flat Elemental Damage of various types - a fixed amount of added damage is better than an increase in your already existing damage. That's why it is recommended to use Anger over Hatred and Wrath and Herald of Ice over Herald of Ash or Thunder.

It's a Life-based build with a high Evasion Rating - it's possible to achieve 4 or 5k of Maximum Life and up to 50k of Evasion Rating and 100% Spell Suppression Chance. It is, however, glass cannon build - your most reliable defensive layer is to kill enemies instantly. The build can reach millions of DPS with the right gear. It offers fast-paced gameplay like most of the Raider builds do; you should constantly have 7 Frenzy Charges, Onslaught, Elusiveness, the benefits of Rotgut Flask, and Avatar of the Slaughter. The build is expensive, there are costly Uniques such as Mark of the Elder or Farrul's Fur, but the most valuable are the Rare Items that could have a lot of Affixes synergizing well with this build.

Patch 3.17 introduced Crystallised Omniscience which is a game-changer for such builds. You can still play without it, but the vast majority of players switched to this new archetype that requires Attribute-stacking. Besides that, the new version included Secrets of Suffering - the recently popular Keystone from Unique Small Cluster Jewel to deal even more damage. Most of the Skill Gem setups remain untouched - we've added Determination, and Assassin's Mark to be linked with Mark on Hit.

Lightning Strike is a melee Attack to use with a Claw, it fires up to seven Projectiles that improve your Clear Speed significantly. To enhance your Clear Speed even more anoint your Amulet with Tribal Fury or get a pair of Gloves with Hunter's Prefix that works the same way. Use Ancestral Protector and Ancestral Warchief to boost your damage during long fights, Whirling Blades as your movement Skill, have a Blood Rage constantly up, and Link your Immortal Call to a Cast when Damage Taken Skill Gem. Use Precision, Grace, Anger, and Herald of Ice which is a preferable alternative to Herald of Thunder - it helps with clear speed.

Start with any Attack that creates projectiles - it can be Spectral Throw, Spectral Helix, Splitting Steel, Frost Blades, and other such skills you feel comfortable with. Lightning Strike can be used as soon as level 12, but it's not crucial to use it right away. As you start putting your Skill Points specifically into Claws be sure to have one by then. Around act 2 or 3 start specializing in Elemental Damage, especially Cold Damage. You can use most of the Essences really, especially Essences of Hatred. you can use Crystallised Omniscience early on, after allocating Utmost Swiftness.

Minor God: Soul of Shakari for You cannot be Poisoned while there are at least 3 Poisons on you; 50% less Duration of Poisons on You and additional Chaos Damage mitigation

You're using Lightning Strike so the Stats you're looking for the most are Elemental Damage with Attacks, Critical Strike Chance and Multiplier, Elemental Penetration, Attack Speed, Accuracy Rating, and added or increased Elemental Damage with Attacks. Your defenses are primarily Maximum Life and Evasion Rating with Spell Suppression. Look for Flat Added Damage to your Attacks, and if you're using Farrul's Fur, have an item with Aspect of the Cat. The build requires a lot of Attributes to benefit from Crystallised Omniscience.