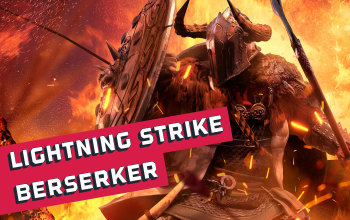 It's a Berserker build that uses Lightning Strike with Trinity Support making you deal a lot of Elemental Damage. You will also be using Crystallised Omniscience to transform your Attributes into Omniscience - it grants you Elemental Resistances and Elemental Resistances Penetration instead of the regular stats that comes with Attributes. Berserker is one of the Ascendancies heavily focused on dealing a lot of Damage with Attacks, and Lightning Strike is one of the best Strike Skills to deal Elemental Damage with. It creates Projectiles so that your clear speed is improved as you can reach enemies further away. With Trinity Support you will have to deal more than one type of Elemental Damage to create Resonance stacks - it's easy to do with Lightning and Cold Damage.

With around 4k of Maximum Life, Chance to Block, Chance to Suppress Spell Damage, Elusive buff, Fortify, and Elemental Resistances sourced from Omniscience it's a relatively tanky build as well as a damage-oriented one. Your Elemental Resistance Penetration is very high, and as a Berserker your Attack should be supported by Rage mechanics, Blitz Charges, Flawless Savagery, and Aspect of the Carnage resulting in tons of Damage. The build offers a lot of flexibility as there are not a lot of required Unique Items, and you won't have to focus heavily on Resistances.

Lightning Strike is the only Skill used to deal damage, the Strikes are supposed to target more than one enemy, and the Projectiles created should Pierce. During boss fights activate several Skills to boost your damage for a short time - use both Ancestral Totems, General's Cry, Withering Step, and Berserk. The Skills such as Precision, Determination, Anger, Defiance Banner, and Blood Rage shall be turned on at all times. For a Guard Spell use Molten Shell, while the Whirling Blades is a good pick for a Movement Attack. Use Assassin's Mark linked with Mark on Hit for more Critical Strikes and Critical Strike Damage.

Lightning Strike is good only when your Strikes target additional Targets and your Projectiles can Pierce, before that use a Skill that would allow you to easily get through the first Acts. During the first few levels use Ancestral Protector with Ancestral Call Support, allocate Tribal Fury and you're set for the next five acts. After allocating Piercing Shots you can start using Lightning Strike, link it with Trinity Support if you're able to create Resoncances - try out Auras such as Anger, Wrath, Hatred, or different Heralds to achieve it. Crystallised Omniscience requires level 20, you can put it on as soon as the majority of your damage is Elemental, not Physical.

41 Points Skill Tree
If you're using Strike Skill allocate Tribal Fury with its Mastery. Start making your way to a Notable "Piercing Shots" if you plan to use Lightning Strike. If you deal mostly Fire Damage pick Laval Lash and Fire Mastery for Damage Conversion.

67 Points Skill Tree
On the left side pick up Steadfast, Bloodless, and Utmost Might with Masteries as shown. On the right side allocate Piercing Shots, Ballistics, and Acuity if you need more Accuracy Rating, if not - go for "From the Shadows" and pick the Elusive-related Mastery, same as with the Claw Cluster

Minor God: Soul of Shakari You cannot be Poisoned while there are at least 3 Poisons on you

Crystallised Omniscience is a key part of the build as it changes the way you gear up your character. Getting more Attributes, especially Strength gives you more Elemental Resistances and Elemental Damage Penetration, so it's great to stack it up. Activating Trinity's Resonances is another thing to pay close attention to - you can't deal the same type of Elemental Damage all the time, it has to change between at least two different ones, look for added Fire, Cold, or Lightning Damage on your Weapon, Gloves, and Rings. Be sure that you have enough Accuracy and high enough Hit Chance, Critical Strike Chance will come organically from your Ascendancy Keystones, but you still can look for it as Blitz Charges actually reduces it. The best way to get more Crit Chance is to cause Brittle - equip Galesight or allocate Secrets of Suffering for it. After capping Elemental Resistances, which should be fairly easy, seek more Maximum Life. Armour, Chance to Suppress Spell Damage, and Chaos Resistances are secondary defensive layers.