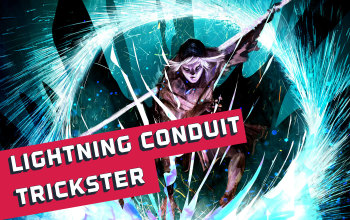 Lightning Conduit is a brand new Spell. It deals damage only to Shocked enemies, which also removes the Shock from them, but it can not inflict Shock by itself. It requires a second Spell to Shock its targets, preferably one that can do it very efficiently so as not to slow you down - Orb of Storms is the best pick. Orb of Storms casts a Chaining Arc-like beam every 3-or-so seconds or each time you Cast another Lighting Spell yourself when in its range. It results in a synergistic sequence of two-buttons-based playstyle. Lightning Conduit deals more damage per effect of Shock on its target. The effect of Shock can be enhanced by another new Gem - Overcharge Support. It allows low-damage Skills to Shock enemies with much greater efficiency, which is exactly what the build needs. The effect of Shock is also increased by the Unique Thunderfist Gloves. Besides that, the build relies heavily on Charges, especially Power Charges. It's tanky enough to gain these Charges by being stationary via Ralakesh's Impatience and withstanding all the attacks. It's able to do so by Leeching Energy Shield with the new Trickster's Soul Drinker Ascendancy Keystone and standing within his Frost Shield dome. You're capable of reaching around 2mil DPS, which is not very high, it's around the same value as Righteous Fire/Fire Trap Inquisitor, and the durability is also quite similar.

The build uses many Unique Items that synergize well with Power Charges such as Void Battery, The Ephemeral Bond, and Malachai's Loop. Some of these items are not commonly used because the drawback of quickly losing these Charges is too debilitating, but since this build is tanky enough to stand still and deal damage for long periods of time, these are great picks. The durability is sourced here only from the high Energy Shield pool that is gained back via Leeching and Recovering (via Ghost Dance). Recharging or Regenerating is almost non-existent, so it creates another great synergy with Shavronne's Revelation Ring on your left side and a Ghost Reaver Keystone. Soul Drinker enables the long-term ES Leech much like Slayer's Brutal Fervour, keeping you safe even after you stop dealing damage to make a dodge. Escape Artist grants a lot of Energy Shield, given you have Body Armour with a lot of Evasion Rating. If you're using Vertex Helmet, it also provides you with around 10k Evasion Rating in total. It's one of the tankiest builds for a Trickster.

To deal damage, first cast the Orb of Storms, and immediately after Lightning Conduit. Your Orb of Storm should be able to Shock reliably many targets each cast due to its splitting beam and Chain Support. To move around and not lose any charges use Lightning Warp, it can teleport you over a distance and you still count as stationary. For boss fights deeply the Frost Shield, you should be easily able to out-leech the ES drain. It mitigates a big portion of incoming Hit damage. Use Arcanist's Brand that will trigger Assassin's Mark, Wave of Conviction, and grant the Arcane Surge buff. For a Guard Spell use a low-level Immortal Call triggered via Cast when Damage Taken. For Auras, we recommend Discipline, Purity of Elements, and Arctic Armour. Wrath is a temporary Aura that you can enable during boss fights, it's linked with a Divine Blessing, socketed in the Vertex.

Lightning Conduit Requires Level 28, but you can begin with a Lighting Spell for a smooth transition later on. Start with Spark at level 1 and switch to Arc at level 12. You should immediately head for the big Lightning Damage Cluster at the top of your Skill Tree, the intake Polymath ascendancy, and start allocating many different Masteries. From this point on you can start focusing more on Energy Shield, but don't take Chaos Innoculation until you have enough ES, most likely no sooner than before allocating the Escape Artist. Ralakesh's Impatience are a bit expensive right now, but necessary for this build to function properly. Don't equip them unless you've taken the Soul Drinker, your build has to be tanky to make any use of this pair of boots. Critical Strike and Spell Suppression-related nodes are the last ones to be picked from the Skill Tree.

There are a lot of mandatory Unique Items here, and most of them are very cheap. Only your Body Armour, one Ring, and a Belt are of Rare quality. It shouldn't be a problem to gather all the necessary Elemental Resistances from just these three gear pieces, especially with Purity of Elements on. There's not much to look for on your Rare Items as the general defensive modifiers are usually enough. Remember that with Chaos Inoculation you don't need any Life or Chaos Resistance.