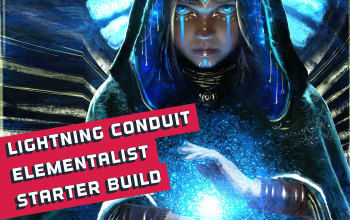 Lightning Conduit is the most notable new Skill introduced in Patch 3.19. It's a Lightning ability that deals very high damage which is further amplified by consuming Shock ailment from enemies. The Skill itself has very high base damage with good damage effectiveness, and it's also increased by the effect of Shock on the enemy Hit. As an Elementalist, you can shock with all types of damage, but for its maximum effect, it's obviously better to use Lightning Spells, and Orb of Storms is our number 1 recommendation.

This is a very basic Life setup with no special Item requirements, that's specifically designed for the early stages of new Leagues, and given the changes to Unique Drop rates, it would be unwise to depend on such items early on. With bonuses to Shock effectiveness and Elemental Damage from the Elementalist Ascendancy, you will be good to go with only self-found Rares, but the build can be easily upgraded by using Uniques like Algor Mortis, Doryani's Prototype, or possibly go for a more end-game-oriented variant based on Staves with Crystallized Omniscience and The Annihilating Light.

This is a simple self-caster build that requires you to cast Lightning Conduit on shocked enemies, which is applied by your Orb of Storms. Shock is used to apply the most powerful Shock with each Hit, and should be supported by Chain Gem so that it covers a wider radius. You will need to constantly recall Orb of Storms to your location as it will hit enemies at a much higher frequency if you use other Lightning Spells while staying near it. Since you want to remain stationary and self-cast your main damage-dealing ability, it's good to invest in additional Armour Rating and Block Chance, allowing you to take increased damage from enemies to get into melee range.

You can start leveling with Arc. It's one of the most popular Spells for that purpose. It has a built-in Chain which is great for clearing, and it also deals increased damage against Bosses. Since you are going to use Orb of Storms in the final version of the build, you might as well use it during leveling - not exactly for Shock, but to deal additional damage against Bosses on tougher enemies. It pairs really well with Arc, and those two should easily carry you through the first half of the campaign. Later on, most likely completing the first Lab to get Shaper of Storms, you should be able to constantly Shock enemies with all your Hits, so you may replace Arc with Lighting Conduit as your primary source of DPS - make sure to remove Elemental Focus from Orb of Storms if you plan to use it to apply Shock ailment though. It's generally a good habit to use several different Spells while leveling and have them deal damage to enemies simultaneously.

35 Points Skill Tree
On early levels, the damage is much more important than Life/defenses so prioritize getting Lightning Walker, Elemental Overload, and Crackling Speed/Heart of Thunder/Breath of Lightning with Lightning Masteries that increases the maximum Effect of Shock and makes your non-crit Lightning Damage lucky

71 Points Skill Tree
Taking Eldritch Battery, assuming you have a valid source of Energy Shield Leech from Spells, will fix all your Mana issues. Then you can go for Sovereignty, Divine Judgement, and Devotion

This Lightning Conduit build is designed in such a fashion that it can be played on Rares only. This is a true Stater Build, which offers sufficient DPS on Gems and Passives alone, but obviously investing in it further can be very profitable and is highly recommended. Unique Items like Thunderfist, Algor Mortis, or Berek's Grip can substantially increase your DPS output at a very reasonable price, while more end-game-oriented setups based on Annihilating Light and Crystallised Omniscience should be also possible, and will be looked into further. This, however, will not be the subject of this particular Guide at this time.