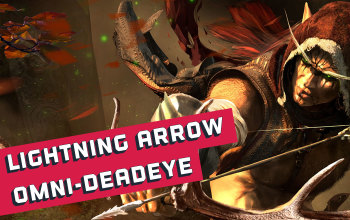 It's one of the builds that use Trinity Support combined with Crystallised Omniscience. The Unique Amulet transforms your Attributes into Omniscience. You no longer gain Life from Strength or other inherent stats correlating to specific Attributes. The combined Dexterity, Intelligence, and Strength now increase your Elemental Resistance and Elemental Resistance Penetration. This way you won't need to accumulate as much Elemental Resistances from your gear's Suffixes, allowing you to focus more on the Dexterity which also increases Elemental Damage Penetration. Lightning Arrow is used to kill the abundant low-life enemies, your second six-linked setup is dedicated to the Barrage Skill.

You should be easily able to achieve over 1000 Omniscience granting you 100% Resistance for each Elemental Damage type and 100% Elemental Resistance Penetration. You can penetrate even more Resistances with Trinity Support which also increases your Damage. As Deadeye you're specialized in Projectile Attacks, and with Gale Force and Focal Point, your Marks and Tailwind effects are enhanced. The defensive layers on top of your 4k of Maximum Life are Evasion Rating, Armour, Block Chance, Spell Suppression Chance, and Life Leech. It's an offensive-oriented build with one of the best DPS among all the builds in the current patch.

Lightning Arrow with Tornado and Hydrosphere cast automatically via Asenat's Chant is used for clearing maps of unremarkable enemies, and for boss fights use Barrage. Additional Skills that would be beneficial are Molten Shell - to reduce damage, Blood Rage - for increased Attack Speed, Life Leech, and Frenzy Charges. Flame Dash can be used as the movement Skill. For the Aura Skills use Determination, Grace, Precision, and Defiance Banner. A curse best suited for this build is Sniper's Mark.

Start with Ice Shot - you can easily get extra Cold Damage from your Passive Skill Tree. Start using Trinity as soon as you're able to get extra Lightning Damage with Attacks to activate Resonance. Crystallised Omniscience can be equipped as soon as Level 20, but with no Dexterity, you will need to gain some Extra Evasion and Accuracy. After that, it's smooth sailing to the end-game version, as you level up you just need to equip better gear and weapons to gain more stats such as added Elemental Damage.

Crystallised Omniscience completely changes many aspects of how you gear up. With Attributes you gain Elemental Resistances and Elemental Damage Penetration - that's why you shall prioritize getting as much of Attributes as you can, especially Dexterity as you take Utmost Swiftness. Besides the Amulet, the build requires Asenath's Chant to Trigger Torando, Hydrosphere, and Mark as you Attack. It's great for increasing your clear speed. Attributes alone won't get you a lot of Damage on their own - you still need to seek added and increased Elemental Damage with Attacks. Maximum Life is the most important defensive layer, and one of the easiest to get, prioritize it over Armour and Evasion.