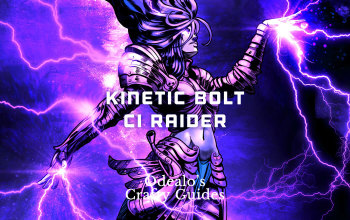 Kinetic Bolt is a new Wand Attack that fires projectiles that change direction multiple times in a zig-zag pattern. Kinetic Bolt also fires additional projectiles whenever it changes direction for massive area coverage and insane visual effect. The skill itself looks as if you had purchased an expensive MTX in the in-game store, and people would actually ask you about it in public parties. It's one of the most visually appealing builds in Path of Exile, which on top of overall enjoyment brings up infinite damage scaling via Intelligence Attribute, and very solid defenses, with around 9,000 Energy Shield, Dodge, Evasion, and substantial Leech.

A similar variation of these builds that use either Kinetic Bolt or Kinetic Bolt can be often seen played by Assassins. True, it will most likely offer higher DPS with the extra Crit. Multiplier and additional Power Charge, but Raider is less common, fancier, has better mobility, and offers immunity to Ailments and higher Dodge/Evasion (in most cases).

For the full list of our Path of Exile builds you can visit the following article: Odealo's Crafty Guides - Full List

This build uses two Wand Attacks. Kinetic Bolt which is used for general clearing and obliterating enemies a screen ahead and Power Siphon is used for single-target damage. Its' inherent bonus Multiplier from Power Charges, and Barrage Support Gem linked, makes this the best Attack to take down end-game Bosses. This build is based on several core mechanics which include:

The fastest way to level up Ranger is with Bows as you have all the damage nodes available right from the start. However, we recommend leveling up with Wands and Kinetic Bolt/Power Siphon so that you get more familiar with this playstyle, and they are not that far behind. You can use Kinetic Bolt right from the start, but it's only good against packs of enemies, you will have hard times fighting Bosses with it. You can either use Barrage or Power Siphon + Barrage Support for that purpose or if you have trouble finding a Wand with high base damage, just use Elemental Hit with Barrage Support. On lower levels, your biggest issue will be actually base Elemental Damage, so it's important to use Added Cold/Lightning Damage Support Gems, and Rare gear with flat added Damage to Attacks. Other than that just follow up the recommended Passive Trees, and make sure to respec to full Energy Shield/Intelligence whenever you have all the equipment ready (in our case it was around level 75 shortly after we started Maps).

Bandits:
You should kill all the Bandits for two additional Passive Skill Points. If you have a very high-level character you can also switch to Alira for additional Critical Strike Multiplier

Let's get down to the most interesting part of our guide. Before we start, you might want to visit our PoE Orbs Marketplace and restock your PoE Orbs as items in this build can cost a fortune (lowest budget you are looking at is around 50 Exalted Orbs, with no upper limit to that). You should understand that this build is rather expensive and doesn't offer much flexibility in terms of equipment - you need equipment with Intelligence and Energy Shield, and such equipment can get pricy. A lot of items here and mandatory, and the number of required Uniques somewhat force you to get standard Rares with high Resistances and Attributes in other slots.