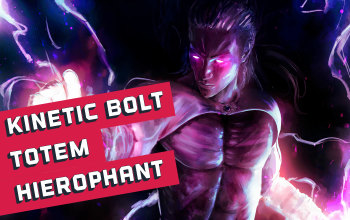 This is one of the most interesting builds we've been working on so far. You play as Hierophant placing Ballista Totems shooting Kinetic Bolts supported by Barrage. To increase the damage of Kinetic Bolt - an Attack Skill that increases its damage as you increase your Spell Damage with twice as much potency - you use Indigon Unique Helmet - it increases your Spell Damage as you spend more and more Mana, and this is why a Hierophant is such a fitting ascendancy for this build. The Skill this build uses doesn't cost much mana compared to your giant Mana pool, so to actually spend the highest amount of Mana in the Shortest amount of time this build uses Arcane Cloak Spell, it spends about 64% of the current Mana - around 4000 in the later stages of the game with one click of a button. that's a 500% increase in Spell Damage thus a 1000% increase in Attack Damage of the Kinetic Bolt.

The Ballista Totems that do all the Damage in this build don't cost that much Mana, so to make them of any use you need to use Arcane Cloak whenever you can. Your damage will be increased by Indigon for the next four seconds after casting Arcane Cloak, which you can cast 3 seconds after it wears off, with the base duration of 3 seconds. The Arcane Cloak itself grants you another 700 or something added Lightning Damage if cast at full Mana. You can also place a lot of Ballista Totems to have Indigon's increase in damage, but it takes some time. What it all means is that the damage will be extremely inconsistent, but devastating at its full potential. Note that after casting Arcane Cloak you won't be able to place Ballista Totems so that's an inconvenience.

Your offenses will consist of Indigon, Arcane Cloak synergy, and increased value of Spell Damage for Kinetic Bolt. Your skill tree is set up in such a way to accumulate a lot of Mana which play a role of both - offensive and defensive statistic. You don't take Agnostic Keystone - this way you can have Energy Shield which a lot of you can get for free from your gear and it's close to Mana and Lightning nodes on the Skill Tree. Your Life should be around 2k and ES around 5 to even 8k. Much of the Damage will be nullified by your Guard Spell - Arcane Cloak. Hierophant ascendancy will grant you a lot of Mana, portion of damage taken from Mana before Life, Transfiguration of mind (increases in Mana will increase the damage as well at 30% of the value), insane Totem buffs, and permanent four Endurance and Power Charges

The build requires some time to get used to. You kill enemies with stationary Totems which you can only place after Indigon's Mana penalty wears off. That's why it is important to place Ballista Totems first and then Use Arcan Cloak. Another utility Spell is Sigil of Power, you can create a zone to stand in that will increase the Area of Effect and adds some Lighning Damage, during longer boss fights you might activate all four stages for additional defense benefits. You manually cast Wave of Conviction to increase the effectiveness of your Lighting Damage by decreasing enemies' resistance to it. Use Flame Dash to move around and dodge Hits.

You can start by using Totems, Holy Flame Totem seeps to be the best option since you can get it early on. At some point, you'll have to switch to the Kinetic Bolt with Ballista Totems, we recommend doing so after you acquire 6-linked Ivory Tower and Prism Guardian Unique Shield, after that, you'll be in a much better position to invest more into Energy Shield and Damage with Wands. Take MoM after you can afford to lose Mana when you take damage.

You can kill all the Bandits if you want two Passive Skill Points, or Help Alira - for Mana Regeneration, Critical Strike Multiplier, and Elemental Resistances.

Below you will find all the recommended and required gear for this build. Some of these items are absolutely mandatory such as Indigon and a few are heavily recommended, like Skyforth for example. Your main objective is to gain a lot of Mana, Energy Shield, and Critical Strike Chance/Multiplier. Capping your Elemental Resistance at 75% is important to start mapping beyond white maps.