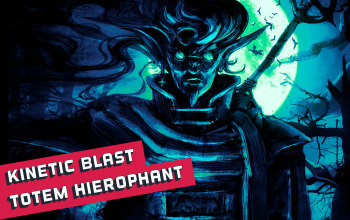 Patch 3.19 introduced some new Items that enable one of the most powerful defensive gimmicks in the game, that is redirecting damage to be taken as one of a different type. The Font of Thunder Unique Shield combined with Divine Flesh Keystone, allows you to convert 90% of Elemental Damage Taken as Chaos and Lightning. Combined with two Shadowed Rings, you can easily reach 100% conversion for both Fire and Cold Damage taken, meaning you only need to cap your Lightning and Chaos Resistances. With Mind Over Matter, Divine Guidance, and Mind of the Council Helmet, half of the Chaos and 80% (10% more with a specific Watcher's Eye mod for Clarity) of Lightning Damage will be taken first from Mana before Life, that's why having a lot of unreserved Mana and rapid Mana Regeneration is vital. Any damage that goes to your miserable Life Pool can be quickly recovered via steady Life Recovery from The Agnostic Keystone that Recovers your Life very quickly by depleting your Mana - the more Mana you have, the faster you will Recover your Life. You also recover Life from the Ritual of Awakening Keystone and Vitality Aura, however, those are used to fuel up Rage from Kaom's Spirit Gloves. These gloves cause your Life Regeneration to not recover your Life, but to generate Rage instead, that is 1 Rage per 100 Life Recovered from Regeneration. Rage is a powerful game mechanic that grants you Attack Damage and Attack Speed, and it can stack up to 50 times.

The build uses Kinetic Blast for clearing maps and Power Siphon for single targets. Both of these Attacks are fired via Ballista Totems that you'll be able to have up to 7 of. Despite not having a lot of Armour and a relatively low Life Pool, the build is very tanky, and with Divine Flesh, you're also getting an extra 5% to Maximum Chaos Resistance. Damage is sourced from Transfiguration of Mind, Wand Masteries, and a lot of added Lightning Damage to Attacks which is sourced from rare gear pieces and Mind of the Council Helmet.

Important note: Like most of the Lightning damage builds, this one goes exceptionally well with Doryani's Prototype. You can basically quadruple your damage at the cost of reduced defenses, but because it would make this setup extremely complex and expensive, it will not be included in the following Guide

Due to Ancestral Bond, you can only deal damage via Totems. For mapping use Kinetic Blast, these Projectiles Fork and explode ensuring smooth and fast progression. For single target damage, we recommend Power Siphon. An important part of the build is Arcane Cloak which is able to mitigate a lot of incoming damage, but it also consumes a lot of Mana of extra damage. To generate Frenzy Charges use Frenzy Skill, which can also apply Sniper's Mark on Critical Hits. Sigil of Power and Frost Shield Skills create areas in which you're significantly stronger. Berserk is to be used after accumulating Rage to significantly boost your performance, use it when fighting tougher opponents. For movement Skills use Flame Dash. You don't want to reserve a lot of Mana, you will need a lot of it unreserved. Vitality, Clarity, and Precision reserve a flat amount of Mana, so compared to your vast Mana Pool, it won't be much.

As a Hierophant, we recommend starting as a Totem Build. Elemental Spell Totems are much more accessible early on, change into Ballista Totems after getting the necessary upgrades. Pick Holy Flame Totem, it deals half Physical half converted Fire Damage. You can use it with any makeshift gear for Fire Spell Damage. Change into Attack Wands only after allocating the three Wand Clusters with their masteries. The final form of the build that includes redirecting damage is only available after getting all the unique items, which is possible after level 69. Be sure to completely change the rest of your rare gear too, as it requires some more specific modifiers than a regular build. Start investing in Mana at the later stages, preferably after allocating Divine Guidance, which we recommend to take for the 3rd Ascension. Note that Atziri's Foible requires only level 16, you should equip it early on for more Mana.

32 Points Skill Tree
Go for the Ancestral Bon Keystone picking up the Elemental, Spell, Mana, and Life notables as you go

78 Points Skill Tree
At this point, you should think of switching to a final form which is Wand/Attack. First, go for the Fire Mastery to convert Physical Damage to Fire. Allocate some more useful masteries, and head for the Shaper notable. If you feel like you can withstand the Mana drain, take The Agnostic and mind over Matter at any point in time.

Maximum Mana is by far the most important resource, the overwhelming majority of the incoming damage will be taken from mana before Life. You don't need any Energy Shield due to the Agnostic Keystone, and you also shouldn't invest in Fire or Cold Resistances. Only Chaos and Lightning Resistances will be important. Maximum Life is not as valuable as it is in most builds, having around 2000 of it is usually enough. Armour is still necessary to mitigate Physical Damage. As for offensive modifiers, seek added Lightning Damage and Attack Speed. Maximum Mana will also get you more Damage due to Transfiguration of Mind. Don't forget about Spell Damage, it will apply to your Attack Damage due to Wand mastery. Critical Strike modifiers are great to have too. You should have t trouble with Accuracy, but getting enough Strength and Dexterity might be a problem, it has to be sourced from your rare gear. The build uses some Unique Items, all of these are build-enabling gear pieces and cannot be replaced.