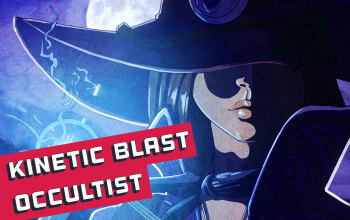 This is an occultist build that uses Kinetics Blast with Power Siphon. It is based on stacking as much Intelligence as possible so it has a tendency to get exponentially stronger the more currency has been put in it. Stacking Intelligence provides a damage bonus thanks to Shaper's Prefix that can be found on Wands - Adds 1 to (5–6) Lightning Damage to Attacks with this Weapon per 10 Intelligence. Using Atziri's Reflection combined with Occultist's ascendancy Notables revolving around curses gives the player a lot of benefits. Besides this one pricey Unique piece of equipment, the build requires other expensive Rare Items granting you Intelligence and Energy Shield. It is not recommended as League Starter mainly because of its price and the fact it is an expensive Attribute-stacking Chaos Inoculation build.

You will be dealing mostly Lighting Damage, the source of it being your Wand. You can stack Attacks Damage as well as Spell Damage, thanks to Crown of Eyes both types of Damage will apply to both of your Wand Attacks. The build relies solely on Energy Shield to stay alive, and as it uses Chaos Inoculation you're completely immune to Chaos Damage and that includes Poisons, with Purity of Elements you're immune to Freeze, Chill, Shock, Ignite, Sap, Brittle, and Scorch, and the Atziri's Reflection makes you unaffected by Curses - Hexes and Marks. The character is unaffected by Stuns too thanks to Vile Bastion Keystone. You're still lacking Armour, Evasion, and your Block Chance is relatively low, but with around 10k of Energy Shield that won't be much of a problem.

By using range attacks - four-linked Kinetic Blast for clear and six-linked Power Siphon with Barrage Support for single targets this build plays really smoothly. The damage scales with Power Charges so it is important to get all of them not only from a passive skill tree but also by having mods benefiting from Power Charges, such as Increased Damage per Power Charge. As for defense layers, the Curses applied to enemies by Atziri's Reflection provide more damage and survivability. Life will be set to 1 and Choas Resistance will equal 100% at all times. Ghost Reaver and Zealot's Oath Keystones are great defensive options if your character doesn't have any Life - it grants Recovery and Leech for ES.

Leveling with a build such as this can be tricky. To reach its full potential it requires level 68 Shaper Mod on a Wand and Atziri Reflection - available at level 70. Not only that, during leveling phase, the character's skill tree will be vastly different from its final form - possibly requiring Orbs Of Regret later in the game to change it. The point at which you switch between the leveling tree and the final tree depends on the gear your character wears and how much ES it has  - picking Increased Maximum Life and maybe Chaos Resistance before allocating Chaos Inoculation is important. Both - Kinetic Blast and Power Siphon skill gems are Projectile Attacks, thus starting at Witch's location may result in lacking damage, allocating Wand Masteries on Skill Tree early on might be useful.

KIlling all Bandits and claiming two additional points is the most favorable option.

Below you will find all the gear you need to run this build. It requires fairly expensive items so you should be prepared to spend a bunch of Exalted Orbs to reach this build's maximum potential. You can still replace plenty of Items with cheaper rares, but this build will offer substantially less DPS. Focus on gathering Energy Shield, Intelligence, and added or increased Lighting or Elemental Damage with Spells or Attacks. Block Chance or any other way to Dodge or Avoid Hits might be desirable stat - these are one of your most exploitable weaknesses. You won't need ES recharge Rate as you have Ghost Reaver Keystone. Keep in mind the relatively high requirements for Dexterity and Strength.