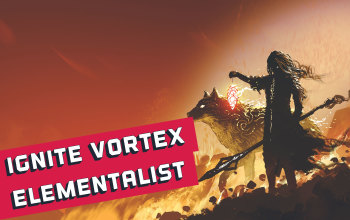 Vortex is a Cold Spell that deals Damage over Time as well as Hit Damage, but in this build, around half of this Damage is converted to Fire causing Ignite, and resulting in a lot of Damage over Time of both - Cold and Fire damage types. To cause powerful Ignites you will have to use the Cold to Fire Support Gem. Combine it with Shaper of Flames so that each of your Hits no matter the damage type will cause this Ailment to be applied each time. You can even combine it with Replica Emberwake Ring if your gear setup allows for it. As is often the case with Damage over Time, your priority is to make your main Damage Skill Gem to be at the highest possible level by using global and local modifiers. It makes the build expensive in a long run, but don't worry, it's cheap to create the basic form that also works well enough. It requires no unique items after all, that's why it's a good SSF pick or a great league starter.

Elementalist deals a lot of Elemental Damage as you can assume. Mastermind of Discord and Heart of Destruction are the Keystones granting, among other benefits, much more Elemental Damage. Grab the Shaper of Flames and Shaper of Storms. Shaper of Storms is important here because it increases your overall damage significantly. Vortex's damage scales up with Spell Damage so it's really easy to achieve a respectable DPS early on. On your passive skill tree, you can invest in all kinds of damage - Fire, Cold, Over Time, and Ignite as it's all very accessible. Vortex is used because it deals DOT as well as Hit damage so it's able to cause Ignites as well as benefit from all the DOT Elemental modifiers. The enemies you kill should induce an explosion via Obliteration or a Pair of Forbidden Jewels granting Profane Bloom. The build is very tanky with a lot of Armour, Evasion, Spell Suppression, and even Energy Shield on top of your over 5k of Maximum Life. The Mana cost of Skills is often a problem, so you can allocate Eldritch Battery to mitigate it.

Vortex has no cast time, it should be listed under your move button to apply it as often as possible. Because of that, it's really important to have your enemies explode on death, the clear speed with Vortex alone is very poor. For a movement Skill use Frostblink, it can cause your Hits to apply Ignite with Combustion and grant you an Arcane Surge buff. Against bosses, it's recommended to use Arcanist Brand triggering Flammability Curse with Flame Surge for even more DPS. For a Guard Spell, use an automatically-triggered Molten Shell. Shield Charge can be implemented as an alternative movement ability, especially if you're not using Frostblink but Dash or Flame Dash. If you're not using Obliteration, and you don't have Profane Bloom, use Infernal Cry for the explosions and to additionally cover enemies in Ash. For Auras use Grace, Determination, and Defiance Banner. Malevolence is also a very important Aura, but here, it is triggered manually via Divine Blessing so it cost a lot of Mana - that's why Eldritch Battery is a fitting Keystone.

Leveling with Elementalist is rather easy, we recommend starting with an Ignite and taking the Shaper of Flames as your first ascendancy. From there on you will allocate the generic Fire/Elemental/Spell Damage from your skill tree. The skill which is at first great for this purpose is Fireball, and after allocating Shaper of Flames it's the Arc, it's very comfortable to clear with. From this point, you can also start using Vortex if you can sustain its Mana drain. Start investing in Damage over Time, and Burning Damage. To finish this build at the later stages prepare a gear that increases the Gem Level of your Vortex.

63 Points Skill Tree
Head for more Fire Damage, Elemental Damage, Maximum Life, Damage overTime, and Mana Reservation Efficiency - it's all on the left side of the skill tree

It's an Elemental Damage over Time type build which also sources a portion of its damage from Spell Damage. The most important will be mods increasing the Gem Level of Vortex and the Damage over Time mods. Reducing Mana Cost of Skills is also very useful, it allows you to not only comfortably cast Vortex, but with proper investment, you won't need to allocate Eldritch Battery to cast the Blessed Malevolence. Ignite/Burning Damage is great, that's around half of your total damage, but remember about your Cold Damage over Time - you should generally focus more on Elemental Damage type than the specific Cold/Fire/Burning one. On your Defensive gear seek Spell Suppression Chance, Evasion Rating, and Armour. Energy Shield is not as important, but there's nothing stopping you from making it a hybrid or even full-on Energy Shield build, especially with high Armour/Evasion and Divine Shield/Ghost Dance. Maximum Life and Elemental Resistances are basic and the most reliable defensive layers. You won't need any Cast Speed or Critical Strike mods. You will need extra Dextrairty and possibly Strength.