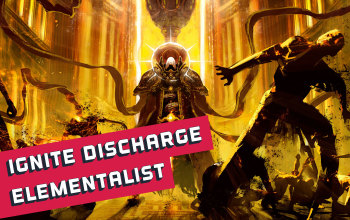 The Shaper of Flames Passive allows you to Ignite enemies will all types of damage, which synergizes extremely well with Discharge. Discharge deals base damage of all Elemental Types depending on the number of Frenzy/Power/Endurance Charges that you have, and it can deal massive damage if you aim at increasing their count. By utilizing specific Items, you can reach a total of over 20 Charges, greatly boosting the base damage of your Discharge. The Fire DoT from Ignites it inflicts, assuming you had all the Charges, can reach tens of Millions. You are also going to make them generate quickly by using Uniques like Voll's Devotion and Farrul's Fur - unleashing devastating explosions whenever Discharge is off cooldown. This is the most powerful Fire Damage over Time build we have ever played, but also one of the most expensive ones. The gear has to be specifically selected for this build with not much flexibility in that matter, making it quite costly and hard to build.

For the defenses, this build offers high and Evasion. Since you have to get all the specific Uniques and Passives, there is not really a more efficient way to prevent incoming damage. Combined with around 5,000 Maximum Life, and Bastion of Elements that absorbs Elemental Damage, it will give you enough survivability to face even the toughest Bosses in the game. It's not like you are going to be hit often with entire screens of enemies dying in under a second.

This is a very easy-to-play build, you just run around and cast Discharge whenever off cooldown. Each explosion will cover your entire screen, with the extra spread from Ignite Proliferation, even enemies that are not yet visible will die nearly instantly. With proper gear, all the enemies will die in under a second, and most Bosses will also melt during just one instance of Ignite. The gear on our character let us reach approximately tens of Million Ignite DoT. By killing enemies so quickly you don't really have to worry much about getting hit. You should have a decent Life pool, high Dodge and Evasion, and Bastion of Elements, so you can feel pretty comfortable taking some damage, but you should definitely avoid DoT/Area Effects like Burning Ground/Caustic Clouds, etc.

The main idea behind this build is to increase the number of all three types of Charges and generate them as quickly as possible. The most efficient way is to get Farrell's Fur which will grant a maximum number of Frenzy and Power Charges every 6 seconds. If you socket Less Duration and Awakened Awakened Swift Affliction Support Gems in the item that has your Aspect of the Cat affix, you can reduce that number to around 2.4 seconds. By using Voll's Devotion, whenever you Discharge and have your Power Charges consumed, you will generate your maximum number of Endurance Charges. If you count in charges gained meanwhile from Blood Rage and Power Charge in Critical Support Gem, you should have plenty of new Charges ready for a new Discharge.

Leveling up a Witch/Elementalist is very easy. We recommend leveling up using Freezing Pulse and Frost Bomb which will deal tons of Cold Damage and offer decent AoE. Respeccing to Discharge will require you to actually get all the Items beforehand. It's pretty much a must-have to get all the specific Uniques to make it run properly, before then you will be better off playing a standard Spell Caster build. In most cases, you should be well into Maps before you switch to Discharge, in our case it was at level 90. Assuming you are creating your character from scratch for this build, you will find the recommended leveling setup below. This includes basic Spell setups for the campaign and low/mid Tier Maps, as well as several extremely useful low-level Uniques that will help you finish the campaign in no time.

Level 85+ Points Skill Tree level 85 is approximately the minimum level when you should respect Discharge. At this point, you should have all the gear ready

Level 85+ Points Skill Tree the Tree after you swap to Discharge. It should include one Large Cluster Jewel and all the Passives from Intuitive Leap Jewels. After switching to Discharge, you are going to fill in the missing Passives on all the Cluster Jewels and do some minor adjustments depending on your character level.

Below you will find the recommended gear for our Ignite Discharge Elementalist build. This is quite an expensive build that doesn't leave much space for inventions. You are required to pick specific Uniques in many of the equipment slots, and you have a bunch of extremely important modifiers on Rare equipment as well. We are also going to include information on how to maximize the number of your Charges, though some of the items may cost as much as our base build in total, just for a single piece (like the Fractured Rings for example). Still, this build isn't meant to be played on a budget, so be prepared to spend tens of Exalted Ors on it, in the best-case scenario.