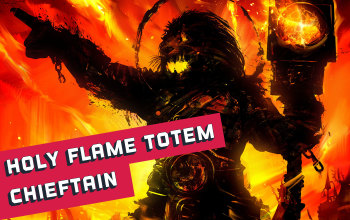 Holy Flame Totem is a rather basic Totem Skill that repeatedly fires Projectiles at enemies, but it's also a Channeling Spell - it creates Projectiles not by performing multiple Attacks but by casting one Spell constantly. It deals Physical Damage, half of which is converted to Fire, the rest you will convert later via Ascendancy Keystones. Totems create Consecrated Grounds that you can benefit from, standing on it regenerates your Life and makes you immune to Curses. The build is extremely cheap and simple - it uses only the basic game mechanics such as Fire Damage Penetration or Damage Conversion. You don't need any Unique or Expensive items, you can assemble this build as you go through acts on SSF. It's recommended as a starter build or a build for new players.

You can achieve 6 to 7k of Maximum Life with a lot of Armour to mitigate Physical Damage. The build is a safe one to play due to its nature - Totems can be used to lure opponents away, while your character can stand behind safely on Consecrated Ground. Your Damage will consist of Fire Totem Spell Damage that's Converted from Physical. It's the best choice to pick Chieftain's Ascendancy - it specializes in Fire Damage and Totem Damage. Take Elemental Overload as your Crit. Damage isn't a focus of this build. The build has the potential to expand on damage later on - especially with more expensive Weapon, Amulet, or Body Armour.

If you've played a Totem build before then you'll have no problem getting used to its playstyle. Place Totems ahead of you to clear the path and progress through the map. You should have a source of Fire Exposure (it can be applied via Master of Fire Notable from Cluster Jewel, Awakened Fire Penetration Support Gem, or Wave of Conviction Spell) and Flammability Curse (can be cast manually, via Ring Affix, or Hextouch Support) to lower Fire Resistance of your enemies. Use Lightning Golem for increased Cast Speed, Molten Shell as a Guard Spell, and Flame Dash for a Travel Skill. You should also use Phase Tun to gain Phasing Buff and Cold Snap to generate Frenzy Charges. For Mana-reserving Spells use Herald of Ash, Herald of Purity, and Summon Skitterbots.

Start with Holy Flame Totem, it's good for Leveling. You won't need to respec any of the Passive Skill Points on your tree as the build won't undergo any substantial changes. Equip items with Spell, Physical, or Fire Damage, your Totems will benefit from it. Keep your Elemental Resistances and Maximum Life High.

It's a Physical to Fire Spell Totem Build, to increase your Damage look for added and/or increased Fire/Elemental/Physical Damage, preferably to Spells only as the more specific mods are typically better. If you can afford some better equipment then look for mods that could increase the Gem Level of your Holy Flame Totem, you can find global modifiers to Fire, Physical, or Spell Gem Levels as Amulet or Sceptre Mods, each can have one or two of such affixes, but you can also get more general local modifiers on your Body Armour, where your Main DPS setup is located anyway. Try to get some Dexterity on your gear, it will be needed to increase the Gem Level of Phase Run. There are no mandatory Unique Items, and the rare ones are cheap so you should have no problem with gearing up your character.