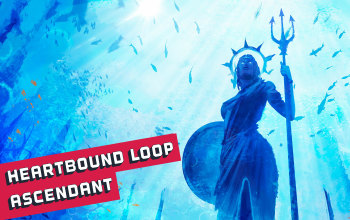 It's a very unique Autobomber build with presumably the highest possible DPS for this type of build. It's based on infinite Cast when Damage Taken loop based on summoning Skeletons with greatly reduced duration, that die expire/die nearly instantly. You then take damage from Heartbound Loop and trigger Summon Skeletons again, a process that will be repeated for as long as you keep your Olroth's Resolve Flask up. In order for it all to work you need a very specific set of Equipment and Gems, and on top of that you need to do some math before setting up your character which makes it quite challenging for a casual PoE player, but at the same time, very intriguing and rewarding. The primary stats you need to take into consideration are:

To start the rotation, you need two Essence-crafted weapons with Spectral Spirits. You are going to use Olroth's Flask and then use weapon swap twice to have those Minions summoned and killed instantly. This will trigger the loop. You can stay in your hideout to try out if it will actually work with you given equipemnt, as you will not die.

You should be able to constantly take enough Damage to feed the maximum level Cast when Damage Taken Gem at its highest Cast rate without taking any real damage. Your Body Armour and two-handed weapon will be a nest for the actual DPS setups, where you can socket any Spells you want. Go for the Annihilating Light Unique Staff - it triples your Elemental Damage. Combine it with Crystallised Omniscience, which transforms your Attributes into Omniscience making you Penetrate Elemental Resistances. It also grants you a lot of Elemental Resistances. Use Divergent Ice Spears (or at least Aerodynamics on a Medium Cluster Jewel) Freezing Pulse to deal Cold Damage. Your 3k of Maximum Life and permanent Ward are not only able to sustain the damage you deal to yourself, but any damage really - it's a very tanky build that's only vulnerable to one-shots. Without any Armour and Choas Resistance, you're obviously more prone to getting instantly killed. The Recoup mechanics is the one you should make use of - you're constantly taking a lot of damage that will be replenished back to you over 4 seconds. Have the Damage you take be Recouped as Mana for rapid Mana Regeneration, and Life so that you will instantly regenerate missing health. The build is expensive and requires some very specific items, some of which you can make yourself - like the Gems, and some of which have to have a lot of Attributes and Ward making the very pricey and hard to obtain.

It's an Autobomber build so you don't really have to do anything, except pop your Flask and start the Loop by using weapon swap twice. Your only active Skills are Flame Dash, Phase Run, and Vaal Righteous Fire. All your Cold Spells will be triggered automatically by level 20/21 Cast when Damage Taken Setups and are great at dealing with any kind of opponent. This build however can be technically used with any Spells you like, but the ones listed are simply the optimal/best choice. You don't have any free sockets for any more active Skills making it's very easy to play as a reward for the painfully complex process of gearing up.

The only thing you must consider when playing this character is getting Flask Charges quickly enough. Usually, this means you will have to progress fast on high-density Areas and teleport back to town quickly after Boss. You could also remove your 4th (or even 3rd) Flask to boost the effect of The Traitor Passive, but I wouldn't personally recommend it - just accept the fact that you will die quite often without proper practice.

There is no way to play it as it is intended until level 90 (more or lless) it requires a lot of Ward, Specific Uniques, and Attributes. The best way to level up quickly is to pick the fastest way and respec points later. We recommend using a Projectile Attack - Splitting Steel to deal Physical Damage and make use of the Impale and Bleed Mechanics. Splitting Still can be used since level 1. Pick the Deadeye Ascendancy first for more Projectile Damage and permanent Tailwind. Switch to the Automomber only after acquiring all the necessary build components.

76 Points Skill Tree
As you notice the decrease in your Accuracy Rating, go for the Resolute Technique. Pick Defiance, Master of the Arena, Art of the Gladiator, and Fury Bolts. Then allocate more Maximum Life and Sword Clusters for a massive DPS boost.

The most important aspect of the build is to have enough Ward as to not take any significant Damage from your Forbidden Rite and Heartbound Loop. Ideally, that would be 1900, but given the fact that your life is rapidly recouping, it can be as low as 1400. You should equip Rare Runic base types as your Helmet, Gloves, and Boots. These grants you Ward, so be sure to have them with a lot of Quality. You need to have at least 2800 Maximum Life, preferably no more than -50% Chaos Resistance, and 0 Physical Damage mitigation to properly activate your Cast when Damage Taken Gems. With Crystallised Omniscience you should stack a lot of Attributes - Strenght, Dexterity, and Intelligence. Your Mana Source is any item with an Affix "Damage Recouped as Mana", and Mana Mastery with the same effect. Be sure that your Olroth's Resolve Flask stays up at all times - without it, your character dies instantly as you take 18k Damage every second. The 0.25 seconds Cooldown of CwDT can be slightly reduced by "increased Cooldown Recovery Rate" affixes and eldritch Implicits, but it can't be lower than around 0.2s - that's a 20% increased Cooldown Recovery Rate in total. It's very important to have this 20% increased Cooldown Recovery Rate. Keep your Gem Levels at bay - with a too high level they might not be triggered when you take damage. Cast when Damage Taken requires you to take 3580 Damage (at Gem Level 21) to activate, with this setup you should take this amount of damage every 0.2 seconds. It's hard and expensive to gear up the character, remember to test the setup in the Hideout and make sure that all the parts of it are in order.