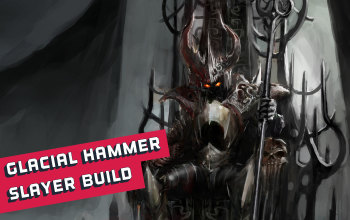 Glacial Hammer is one of the first skills you've probably had a chance to experiment with as a Path of Exile player. It's a very simple Melee Strike, but a very effective one - it basically is an attack enhancement. Glacial Hammer has a very high chance to Freeze enemies, increases the effectiveness of Freeze and Chill, has increased Strike Range, and Added Cold Damage. The unique aspect of this skill is its enormous single target damage, it's possibly the single best Attack in the game in this category. As of patch 3.17, the skill converts 100% of your Physical Damage to Cold making it even easier to assemble. The build wasn't expected to perform well as a fast mapper, and it definitely isn't one, but it is still at an acceptable level due to the abundance of Frenzy Charges and Shattering mechanics.

As a Duelist, you're often conditioned to choose a playstyle that offers purely physical damage output. It's because of how easy it is to access the nodes suited for such playstyle from your starting location on the passive skill tree, and because more than often Raider, Berserker, or Inquisitor can execute it better. In this build, we wanted to expand on the dormant single-target potential of Glacial Hammer, so we went with a Slayer. With Bane of Legends and Headsman, the character will be able to kill bosses with ease. Masterful Form will increase its damage after combining it with Arn's Anguish. The Impact is chosen for a better clear speed and damage. The defenses of the build have been more of an afterthought, but luckily for us, it can be easily patched up with tons of Armour, Fortify Buff, and a lot of Life.

It's a simple to play build: jump using your Leap Slam until you spot any opponents, try to land right in the center of a pack of enemies, swing your weapon a few times using Glacial Hammer, and continue the loop. During boss fights deploy your Ancestral Totems for more Damage and Attack Speed. A level 1 Frost Bomb is better to be cast automatically, it grants a lot of utility bonuses. The Auras you should use are Hatred, Precision, Herald of Ice, Determination, Defiance Banner, Blood and Sand, and Aspect of the Cat. Have constantly enabled Blood Rage too. As your Guard Spell use Molten Shell, and for a Curse - Frostbite.

Start with a Strike Skill. It can be Glacial Hammer or Frost Blades. It's much easier to invest early on into general Attack Damage rather than a Specific Cold or Elemental one. To be able to fend off a surrounding mob of enemies use Ancestral Call Support, and pick an Attack mastery for extra range. Not long after the first few acts we recommend turning right on your passive skill tree, that's where Cold Attack Damage can be easily found. Allocate the passives near Fervour, these are some of the best ones. You can allocate a Precise Technique, but it requires keeping track of your Health and Accuracy which might be troublesome and slow you down. If you're using Glacial Gammer, seek mostly added to attacks type of Damage.

Major God: Soul of Solaris 6% Physical Damage Reduction if there is only one nearby Enemy; 20% chance to take 50%  less Area Damage from Hits

It's an Attack that converts all of its Physical Damage to Cold. The most efficient way to increase your DPS is to look for added Cold or Physical Damage to Attacks. The character deals no Critical Strikes, but your Accuracy Rating must be higher than your Maximum Life. You will have to look for it on a Helmet, Gloves, Jewels, and Jewelry. To fit in all the Auras, we've used a Mana Reservation Efficiency Cluster Jewel which might be Expensive. To generate Endurance Charges we used Replica Farrul's Fur, one of the most expensive Body Armours. It's the easiest and most elegant way to do so, as the Armour is great on its own. Combined with Arn's Anguish, these charges will grant you more damage instead. Find a way to apply Frostbite on hit, and to cast Aspect of the Cat. The best mods are the ones that scale up your damage with Frenzy Charges.