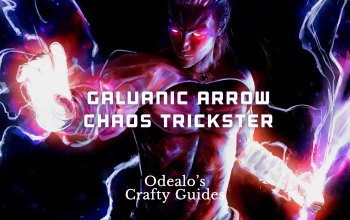 Galvanic Arrow is one of the most visually appealing Bow Attacks in the game, which combined with Barrage Support and high Attack Speed makes it deal very high AoE damage in a cone shape in front of you. This is your primary single-target DPS ability which feels like you would be firing a powerful shotgun with a massive spread. Galvanic Arrow can be played in many ways, like most of the standard Bow Attacks, but this wouldn't differ much from our Tornado Shot or Ice Shot Ranger builds, so we have decided to make it a little bit different. We have picked Trickster Ascendancy and Eternity Shroud to provide high Elemental to Chaos Conversion, which you benefit from twice, by converting Galvanic/Lightning Arrow's base Lightning Damage to Cold by using two Call of the Brotherhood Rings. If you can manage to obtain all the gear pieces which are influenced by the Shaper, you will get tons of extra added Damage and Ignore enemies' Chaos Resistance entirely. At the same time, Trickster offers second to none mobility and speed, which combined with Lightning Arrow's chain and radius, makes this one of the fastest and most efficient farming builds for a Bow character.

The only downside here is that it's quite expensive. This build requires specific Uniques, which in the best case scenario should be influenced by the Shaper. Only with full Shaper gear, you will deal enough damage against end-game Bosses to farm them efficiently, otherwise, it's just a solid Tier 15-16 Map Farming build.

In terms of playstyle, this is a typical ranged/bow build that utilizes two different Attacks for general clearing and single-target damage. You are going to use Galvanic Arrow which deals area damage in front of your character, which has a small radius but deals very high damage, and for general clearing/farming, you will be using Lightning Arrow which has an increased number of Projectiles, deals damage to additional targets after the first one, and Chains to additional enemies multiplying its effect. It will also create a Mirage Archer (if you are going to use the corresponding Support Gem that we strongly recommend using) allowing you to quickly progress through areas while it continuously uses the skill for a few seconds duration. For the defenses, this build offers a decent Life pool with high Dodge and Ghost Shrouds from Trickster's Ascendancy which reduces your damage taken, and grants Stun immunity (among other less significant bonuses).

Leveling with Bows is very easy as it offers great clear speed and solid damage. When you combine it with Trickster's fantastic mobility, you should be able to complete the campaign in a jiffy. Lightning Arrow offers amazing clear speed and it's pretty much all you need for this phase of the game. You can still use Galvanic Arrow as extra damage against Bosses while your Mirage Archer keeps the Lightning Arrow up. Below you will find the recommended leveling setups and several powerful Unique Items that will help you rush through the campaign. On all the other equipment you are looking to get Added Elemental Damage to Attacks, Maximum Life, Resistances, and possibly Movement Speed.

Notes:
Using Point Blank is optional, if you are comfortable staying in Melee range versus Bosses, it's best to use it for the extra damage, but if you are playing it safe from a distance, it's better to skip it entirely

Below you will find all the recommended gear for Galvanic/Lightning Arrow Chaos Conversion Trickster. This build requires a number of specific Uniques and is best played with a full set of Shaper Items, so it doesn't leave much space for creativity. It's not exactly a budget-friendly build either if you are looking to farm high Tier Bosses, but if you just want a non-meta Map farming build - it will do the job more than fine.

Using this opportunity, we would like to invite you to visit our Path of Exile marketplace where you can buy PoE Currency with real cash from regular players, allowing you to easily get all the best equipment for this or any other build.