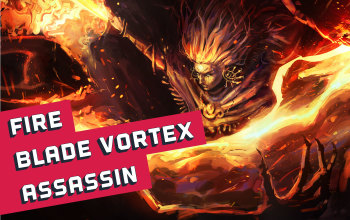 Blade Vortex was, and still can be considered as one of the most devastating AoE-type Skills. You create temporary rings of blades orbiting you dealing Physical Damage. It's not DoT but the rate at which Hits occur is rapid enough to make it feel like enemies are being damaged as consistently as with Death Aura. The orbiting blades are temporary and have to be re-cast at the end of their duration, and you can have up to 10 of them. To make it more comfortable to play you're going to link it with Unleash Support to cast the Spell many times at once. The Ascendancy of your choice is Assassin whose power derives from Critical Strikes and Power Charges, which you will need 7 or 8. The Damage type of your Blade Vortex is Fire, converted from Physical.

The most prominent Passive Skill in the build is Herald of Ash, it sources its Fire Damage from Physical Damage, and makes your opponents explode when killed starting a chain reaction that makes up for the short range of your Vortex. The Herald is such a fitting component of the build that you can allocate Lone Messenger Keystone - your Auras are disabled, but the one Herald Skill you can use is vastly improved in terms of Damage and its Effect. It's an extremely offensive-oriented variant because it disables your Auras such as Determination, and it's generally not recommended for Hardcore players. The build is excellent for clearing but it is as good with single-targets - the Vaal variant of Blad Vortex creates standalone Vortexes that seek enemies shredding any opponent in seconds. It's a glass-canon build with around 4k Maximum Life and Energy Shield and a moderate amount of Armour. It's expensive too as the end-game items require some very specific combinations of mods to increase the Gem Level of Blade Vortex.

Gameplay is simple as there aren't many skills to use. Your Blade Vortex should be up at all times, even a singular blade ring should provide enough Damage for clearing as the Herald of Ash will do the rest of the job. Your Mana Pool will be overflowing with unreserved mana if you're using Lone Messenger, use Arctic Armour as it is not an Aura. If you don't use Lone Messenger, use other Auras such as Determination, Anger, Defiance Banner, or Herald of Purity. Molten Shell or Steelskin are great Guard Spells, use Dash or Flame Dash for improved mobility. During encounters with tough opponents cast Vaal Blade Vortex, you can store up to two of them. For more Damage use Vaal Righteous Fire but be careful as it leaves you with almost no Life.

Start with a Spell that deals Physical Damage, Blade Vortex is the obvious choice but you can use Ethernal Knives too. As you manage to convert a majority of your Physical Damage to Fire start using Fire related Spells to boost your damage such as Flammability Curse, or Anger Aura. Fire Mastery grants 40% conversion, the rest can be achieved as a cheap craftable mod to be found on a lot of gear pieces. Keep in mind that you're using Spells, not Attacks. Start as a Life build, and transition to a Hybrid build later.

It's a Physical to Fire Spell build that should have a high Crit Chance and Multiplier. Try to achieve 100% Crit Chance and around 500% Crit Multiplier, with your Ascendancy and Power Charges it should be rather easy. To increase your Damage look for added and/or increased Fire/Elemental/Physical Damage, preferably to Spells only as the more specific mods are typically better, aforementioned Crit-related mods, and arguably the most importantly - a way to increase the Gem Level of your Blade Vortex. You can find global modifiers to Dexterity, Physical, or Spell Gems as Amulet or Sceptre Mods, each should have one or two of such affixes, but you can also get a more general local modifier on your Body Armour. Try to get some Dexterity and Strength to run the main Blade Vortex Skill and Molten Shell at a max Gem Level. Don't focus too much on defense unless it's the obligatory 75% Elemental Resistances and Maximum Life.