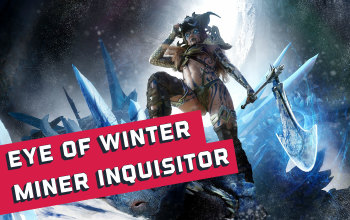 The Traps and Mines playstyles are usually reserved for Saboteurs, but that's not always the case. The advantage of Mines is the ability to cast multiple Spells all at once ignoring Cast Speed completely, but what is more important here, is that it allows you to keep a safe distance from your target as the Projectiles released from Mines are very slow. Eye of Winter works similarly to Ball Lightning, you want the target to be constantly in the area of a Projectile to sink in all the damage it constantly radiates. Eye of Winter is a Projectile that shoots out secondary Projectiles. At the end of its duration, it fires an extra wave of shards, so it's likely that the enemy would be caught in its radius too for a massive burst of damage. The reason to use this Spell over Ball Lightning is the ability to Freeze and equip the freshly-reworked Heathiver Helmet. Inquisitor is simply one of the best Ascendancies to deal Elemental Damage, and with Pious Path Keystone, it boosts your defenses too. The build is not very expensive, it uses The Annihilating Light as a Weapon and Skin of the Lords as Body Armour. You won't even need to six-link the Staff.

As an Inquisitor, you'll have a high base Critical Strike Chance, Inevitable Judgement, so you won't need any Elemental Damage Penetration, no need for Cast Speed, and the base damage already tripled via The Annihilating Light. The Gem setup grants more and increased Damage on top of the already high flat base damage, which scales really well with the Eye of Winter's Gem Level. The passive skill tree is used to obtain extra Spell Critical Strike mods, Mana Reservation Efficiency, and Mine-related nodes. It uses two Large Cluster Jewels and four medium ones simply for even more DPS. If you have enough damage to Freeze bosses, Heatshiver will double your damage by adding the same amount of Cold Damage as Fire Damage, but it works with the enemies that are just Chilled. The build doesn't invest in any kind of Elemental Penetration or the Effect of Elemental Ailments so adding this extra damage layer is especially beneficial. It's not very good for mapping and its defenses are poor, but it is excellent at boss-killing.

You're dealing damage via Mines - throw them in from of you and let Skitterbots detonate them for a smooth gameplay experience. You might want to swap some of them gems for mapping, like Slower Projectile Support Gem for one that allows you to throw them faster or cover more area. Your damage will be high enough to Freeze any opponent. To enhance your single-target damage use Arcane Surge with Flame Wall, Bear Trap, and Sniper's Mark. It will be rarely used. For a Guard Spell use low-level Immortal Call with Cast when Damage Taken. Flame Dash is the best movement Skill. For Auras use Vitality, Hatred, Purity of Elements, and Zealotry which should be linked to Divine Blessing Support and activated during boss fights. For more Damage use Righteous Fire, it's not a trouble to sustain its damage for an Inquisitor.

We recommend leveling with an Elemental Damage Spell, Templar's really good at it. There are a lot of Lightning Damage nodes just outside your starting location, pick them all up and pick up Arc or Ball Lightning. You will need to respec these passive skill points invested in Elemental Damage anyway to make some space for Cluster Jewels later on anyway. First, we recommend picking up the regular Lightning Damage nodes with some Maximum Life, doing so you'll be easily able to reach yellow maps. The Annihilating Light requires level 68, after quipping it you can switch to Cold Damage, and if you have allocated at least two Mine Clusters on your Skill Tree, and a six-link, you can switch to the final Mine setup. Coward's Legacy requires level 52, but equip it only after allocating Pious Patch to reduce the Curse effect.

75 Points Skill Tree
Just pick more of the aforementioned stats to amplify your damage and survivability. You will also need Mana Reservation Efficiency.

What you have to keep in mind is that you won't need any Cast Speed or Damage Penetration due to Mine Throwing Speed being not affected by Cast Speed, and Elemental Damage Penetration is overwritten by Inveitalbe Judgement. The most important will be the extra Levels for Eye of Winter Gem and Critical Strike Chance and its Multiplier. You should be able to increase the level of this Spell to 27 or rather effortlessly, just from Skin of the Lords and level 3 Empower, but with the Awakened Empower at level 5 and two extra Gem Levels from Amulet, and double-Corrupted Skin of the Loyal with just the right Implicits, it's possible to make it 34, which is what you should ultimately strive for. You should be able to reach a 100% Critical Strike Chance with some additional modifiers from rare items (including Strength due to the Righteous Providence). Look for some extra Mana Reservation Efficiency, it can be found on an Amulet or Small Cluster Jewels. The build uses a lot of Unique Items, only Boots, Gloves, and one Ring are of Rare Quality, you will need a lot of Elemental Resistances on them to combat the abundance of Uniques. Additionally, The Annihilating Light lowers them by 60% so be prepared to get some expensive rares. Cluster Jewels will be important, you can use up to two Large and four Medium ones. You will have up to six Jewel sockets, so gathering the missing Resistances and Attributes from there is very recommended. You will also need 155 Dexterity for Sniper's Mark, it might be hard to get.