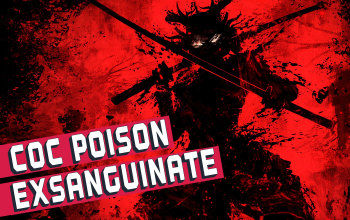 Critically poison your enemies without ever breaking your flow to cast a spell manually!

Cast on Critical Strike is a very unique playstyle in Path of Exile that allows you to Cast many Spells without actually Casting them - instead, you trigger them with your Attacks when you happen to land a Critical Strike. This setup, while not perfect, has many advantages over manually casting a Spell (often called self-casting). The biggest of them all is the high frequency of triggered Spells -  getting similar levels of Cast Speed on self-cast is very hard, and if a specific Spell has a particularly slow base Cast Speed it's almost impossible. Another key factor is positioning, fast Attacks don't lock you in a place as most Spells do, and in the case of this Build, allow you to continuously move while performing said Attack. This significantly increases the survivability and enjoyment of the Build.  In return, you have to invest in Critical Strike Chance for both Spells and Attacks. It just so happens that Assassin is a great Ascendancy for such requirements, as it offers immense Critical Strike bonuses.

With that being said, let's talk about our Spell of choice. Exsanguinate is a Physical based Spell that fires bloody Tendrils at nearby enemies. It offers great Damage but has one major downside - a very low base Cast Speed. To further emphasize the synergy with the Assassin, we decided to take the Poison route. Thanks to this Ascendancy you will have a higher Critical Strike Chance against Poisoned enemies, and your Poisons from Critical Strikes will deal more Damage.

Defensively speaking, it's quite a safe Build, but nothing out of the ordinary. You can easily reach a decent amount of Maximum Life with a little bit of Energy Shield on top of it, high amounts of Evasion, and capped Spell Suppression Chance. As an Assassin you will take greatly reduced Damage as long there are at least 2 Rare or Unique Monsters nearby, which happens very often during regular Mapping. Your biggest threat is your own Spell Cost - instead of Mana, it consumes Life. If the fight prolongs, you will need to help yourself with Enduring Cry and Life Flask to sustain it.

You don't need expensive Items to play comfortably with this Build, but some investments are recommended to achieve good survivability. There are many cheap and useful Unique Items that can be later replaced with proper Rare Items.

For the most part, all you really need to do is simply spin with your Cyclone, which will trigger the Exsanguinate at all nearby enemies, and move around using Whirling Blades. Occasionally you will have to cast your Despair Curse and apply Wither to your enemies. The latter one will become fully automated when you acquire a specific Unique Jewel.

Leveling with this Build is very smooth, but we recommend avoiding committing to both Poison and Cast on Crit until you reach the later Acts of the campaign.  You can easily level up by self-casting the Exsanguinate Spell and rely on its initial Damage over Time effect. Getting Items that boost the level of your Spell Gems will greatly enhance your experience, as this Skill scales very well with it.

Leveling Skill Trees:
We recommend picking up a few additional nodes that boost your Physical Damage and respec them later in the Campaign when you transition into Poison Setup.
33 Points Passive Tree
Suggested order of allocation: 1) Trickery 2) Entropy 3) Fangs of Viper 4) Will of Blades  5) Blood Drinker 6) Revenge of the Hunter

There are many cheap Uniques that can be used to kickstart the Build until you can afford better Rare Items. On the other hand, there are also a few Uniques that are much better than any Rare Items. The Balance of Terror is a new Unique Jewel that with a proper modifier to Despair Curse can completely replace the Wither Spell Totem setup. Forbidden Flame&Flesh with Polymath Notable is a luxury choice, as it offers a great Quality of Life and solid Damage bonus, but it's not required. You should aim for high amounts of Spell suppression on your Shield and Boots, as it's pretty much unavailable on your other slots. You should aim to use hybrid Evasion and Energy Shield bases for your Gear, however, most of your Energy Shield comes from Timeless Jewel. If possible, get the Life Regeneration modifiers on all Gear pieces you can. It greatly improves your sustain, as Regeneration is the only form of recovery available for DoT Builds. You will need to get a bit of Poison Chance from various sources other than your Passive Tree, such as rare Weapon, Jewels, or alternate quality on your Gems.