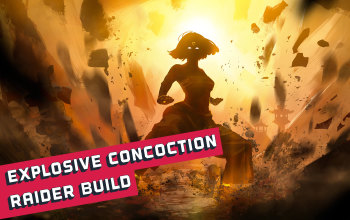 Raider is a class perfectly suited for fast-paced Attack Builds, and this one is a fine example amongst them. Explosive Concoction is a unique Attack that requires you to wiled no weapon, but it's compensated by the Skill's high base Fire Damage which can be further improved by a certain Flasks. Topaz and Sapphire Flasks will be used to add Cold and Lightning Damage to the Concoction's Projectiles. One of the best aspects of this Attack is the fact that the Flask's Explosions can overlap (shotgunning), making it great for boss fights if you're able to fire a substantial number of Projectiles. As you're dealing non-specific Elemental Damage with a high Critical Strike Chance, implementing the Crystallised Omniscience is an excellent idea.

Where this build shined the most, is the defensive aspect of it. You have a lot of Armour, 20k Evasion Rating, a 100% Chance to Suppress Spell Damage, Versatile Combatant Keystone for a 50% chance to Block all Spell and Attack Hits, all of it on top of 5k Maximum Life. For your Ascendancy Keystones pick Avatar of the Slaughter and Avatar of the Chase to create an exceptionally brisk character. Attribute-stacking is very expensive, where additionally you will also need to gather all the Maximum Frenzy Charges, modest Block Chance, Critical Strike modifiers, Accuracy, and increased Damage modifiers. For a build that requires such magnitude of various stats, the sky is the limit. You can invest an endless amount of currency into the build, and there would be still a lot of room to improve, as it consists almost exclusively of Rare Items.

The main and only Skill used to deal damage is Explosive Concoction. To apply Exposure, a fully-automated Wave of Conviction supported by Combustion will be cast as you take damage. The only utility Skill that has to be cast manually is Ancestral Protector, it grants you more Attack Speed. For a movement Skill use Dash, Assassin's Mark is the best choice for a Curse, while Molten Shell is the Guard Spell we've chosen. For Auras use Determination, Grace, Defiance Banner, and Precision.

The Explosive Concoction is available at level 28, you can start using it right away after reaching this threshold. Until then, we recommend Frost Blades. It's an attack similar in nature - a Projectile one that deals Elemental Damage. Crystallised Omniscience can be equipped at level 61, and it will require some tinkering with your Passive Skill tree to make it more efficient, so be prepared to spend dome Orbs of Regret. At first invest only in Maximum Life and Elemental Damage, later to include Critical Strike Chance, Mana Reservation Efficiency, Accuracy, Attributes, Spell Suppression Chance, and Block Chance. Leveling process should be quick and easy.

71 Points Skill Tree
Pick up all the Notables for Maximum Frenzy Charges, some more Maximum Life, and Blood Siphon notable - as is shown

Minor God: Soul of Shakari: You cannot be Poisoned while there are at least 3 Poisons on you, 50% less Duration of Poisons on You

The most treasured Stats to look for on your Rare Items are Attributes (mostly Dexterity), Critical Strike Chance and its Multiplier, Attack Speed, increased Attack Damage, Elemental or Fire Damage, and Accuracy Rating. If there's any rare affix for increased maximum Frenzy Charges or damage scaling with Frenzy Charges, it's also extremely valuable. For Defenses, try to get Attributes, Maximum Life, Resistances, Spell Suppression Chance, Block Chance, Evasion, and Armour. Remember to include a source of Mana Leech or reduced Mana Cost of Skills, and increased Mana Reservation Efficiency. Attributes are important, because of the Crystallised Omniscience Unique Amulet - it's the only Unique gear piece to include in the build.