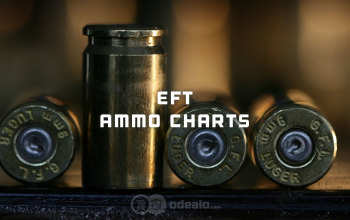 Escape from Tarkov does a great job reflecting the real-life ballistics and ammunition behavior. Bullets drop off over distance, lose velocity while traveling through the air, ricochet after impact, have a chance to fragment after entering the body, and so on. Understanding these gun-play mechanics is vital for in-game success, but it does not guarantee it. The other, maybe even more important, component of a successful raid is the right choice of ammo. Every Weapon available in the EfT has a variety of compatible cartridges and these cartridges have different properties that determine their combat effectiveness.

This guide aims to show off all important EfT's ammunition parameters, compare different ammo types, point you towards the best cartridge of each caliber, and directly compare two parameters that you are, probably, the most interested in - Penetration Power and Damage Value, within respective calibers.

We are aware that there are a lot of numbers featured in the table, and this is why we have decided to divide the table into caliber sections and show the data in a more accessible way in a further paragraph.

Here is a quick explanation of the Table's Headlines meaning:

The following graphs show the Penetration Power and Damage Value of all cartridges of each caliber.

Note1: In order to show the best ammo choices more clearly, we have decided to choose Penetration Power stat as our segregation criterium for all graphs.

We hope that this guide will help you choose the best ammunition types for your favorite weapons in The Escape from Tarkov. However, please remember that these are just numbers and there is much more to the game than statistics. If you struggle, even after selecting appropriate ammunition for your weapon, practice, practice, practice, and you will be eventually able to overcome even the hardest challenges that Escape from Tarkov has in store.

Please do note that this is an early version of our guide, and we will be happy to receive constructive criticism, that will help us improve it, so leave your suggestions in the comment section below.