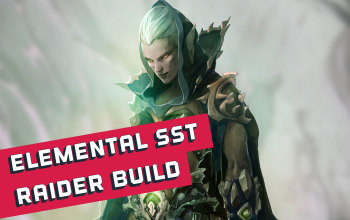 Since the last changes were made to this skill Spectral Shield Throw is not as popular as it used to be, but still remains as one of the favourite Skills by many players who played it for its unique style. Using newly buffed in 3.19 Patch Unique Shield you can reach very high amounts of Damage without worrying about crafting your own Rare Shield, which was usually the hardest part to get on any Shield Skill build. Raider has a Unique Avatar of the Veil Keystone that applies Exposure of all Elements to the enemies nearby, it will help immensely since you'll be dealing only Elemental Damage. After such adjustments, you're specialized in dealing tons of Elemental Damage of all kinds while Chill and Blind from The Pandemonius Unique Amulet keep you safe from enemy Hits. The build is Life-based with a high Chance to Evade Attack Hits, 100% Suppress Spell Hits and permanent Phasing, which allows passing through mobs without being constantly blocked. Additionally, after some investments, you will be Elusive and have Tailwind active, making you even faster and stronger. Your Damage will scale well with Frenzy Charges thanks to Avatar of the Slaughter. You could play this build as a Deadeye for a different set of Ascendancy Keystones; it would grant a strong Tailwind Effect, better Effect of Sniper Mark, and a different approach via having Far Shot instead of Point Blank, but we recommend staying as Raider for overall better Defenses and Damage.

Spectral Shield Throw is a skill that adds more flat Physical Damage per Evasion or Armour on a Shield. The Potential is really high - the build can reach Millions of DPS with the right Shield. Thankfully one of the less used Unique Shields, The Emperor's Vigilance got a massive buff of 600% increased Armour, making it the best choice for this Skill. Seething Fury is a Unique Jewel that's singlehandedly responsible for a half or so of your damage, for it increases Crit Chance and Multiplier per Maximum Energy Shield on a Shield. Additionally one of the Alternative Quality variants, Phantasmal, also grants Critical Strike Multiplier per Maximum Energy Shield, making that stat even more useful. So not only Evasion or Armour Rating, but Energy Shield is yet another important stat to look for on your Shield. Although mentioned Unique Shield is very strong, you can start playing with this Build with just a Rare Shield.

Elemental Spectral Shield throw is a very unique Ranged Attack that instead of firing Projectiles with a Bow, shoots a spectral copy of your Shield that deals greatly increased damage based on its defences. The attack fires projectiles that on impact shatter into additional chaining projectiles, offering massive DPS and amazing clear speed, making it the most popular Shield Ability. This build utilizes the Raider class that offers amazing Elemental/Attack DPS bonuses, great mobility, and increased Evasion/Suppress. You are also going to use Hydrosphere, which is one of the most important abilities in this build. It will allow your Spectral Shield Throw Projectiles to chain between enemies and the Hydrosphere, greatly boosting the effectiveness of the Chain mechanic. Most of the other abilities are triggered in this build, and Molten Shell can be used manually by binding it to your Left Mouse Button to cast it every time it goes off cooldown. You are also going to use Blood Rage and Ancestral Protector, that for the most part, should be used against Bosses to boost your DPS.

There are many ways to start with the build, it is recommended to use a Projectile Attack while holding a Shield, for example, Spectral Helix or Lightning Strike, and deal some kind of Elemental Damage, Cold Damage seems to be the most suitable for this part of the Passive Skill Tree. Focus on your Elemental Damage while maintaining high Elemental Resistances and Maximum Life. Use Essences of Hatred to craft a weapon or use a vendor recipe for added Cold Damage. Switch to Spectral Shield Throw after you manage to get a decent Shield with 800 Evasion Rating and 200 ES - that's a good start.

31 Points Skill Tree
go for One with Nature and Assassination, taking the useful Life nodes on the way, then go for Forces of Nature.

72 Points Skill Tree
go for the Point Blank, allocating Crit and Life nodes on the way depending on your current needs, then go for Frenzy nodes

The Shield, as mentioned already, is the most important part of the build. Seething Fury is a mandatory Jewel and Hrimsorrow enables your Physical to Cold Damage conversion but other than that your build can be just Rare items. Of course, there are some Uniques you can aim for that are outclassed only by very good and expensive Rares. Despite the high amount of ES from your Shield, it's still a Life build, so seek Maximum Life wherever you can. Your Damage will come in the form of Elemental Damage - mostly Cold, Critical Strike, Attack, and Projectile Damage modifiers are useful for this build. Surprisingly one of the best Weapons for this build is The Princess since you don't actually use Weapon to Attack at all, but its global extra damage modifiers apply to Spectral Shield Throw. On top of that build is very flexible, both Iron Reflexes and Ghost Dance Keystones are in the range of 1 passive point depending on your preferences of Armour versus Evasion-based character.