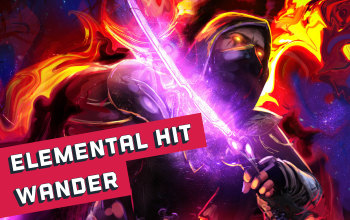 Elemental Hit Pathfinder is a more defensive-oriented version of the Raider build that uses Wand with a Shield instead of Bow. Pathfinder Ascendancy offers great synergies with Flask. You'll be able to use them much often thanks to Nature's Boon and Master Surgeon, additionally, Veteran Bowyer enhances your Physical damage and increases your Elemental Damage. With Crown of Eyes your Spell Damage that is commonly found as Wand modifiers affect your Attack Damage, much like Wandslinger Notable, but with the effectiveness increased by 150%. With high Crit Chance and Hit Rate, you'll never be out of Flask Charges because you gain one each time you deal a Critical Strike. The build uses Ballista Totems to fight more resilient and stationary targets, and Hydrosphere, to Drench enemies and increase your damage.

You won't specialize in any particular Element, as is often the case in Elemental Hit builds, instead all the types of Elemental Damage will play a major role in total DPS. Use Trinity Support and Elemental weakness to make such a strategy work. Your Veteran Bowyer Keystone fits in this playstyle nicely as it grants you bonus damage of a random Element. To stay alive you will mostly rely on your Maximum Life - around 5k of it, constant Flask usage, High Dodge Chance due to Acrobatics Keystones, and a moderate amount of Evasion Rating. The overall damage of the build is good, not as good as the Raider version, but it has its own benefits that may suit a specific playstyle.

You're going to use Elemental Hit with a Wand, it's one setup for general use - boss fights and maps clear. Your Hydrosphere will be cast automatically as you use your Elemental Hit via Spellslinger Support. Blood Rage and Lightning Golem are utility Skills to support your overall DPS. Use Skitterbots to apply Elemental Ailments on enemies, if you kill such enemies you gain twice the normal amount of Flask Charges. For Boss fights, you can use additional firepower by placing Ballista Totems that use Elemental Hit. Curses should be applied automatically. For faster movement use Shield Dash.

Start with an Elemental Attack, Ice Shot is a great option. Use Bow until you're able to equip Crown of Eyes, or you can alternatively allocate Wandslinger Notable, after that start using Wands with high Spell Damage. Look for Attack Speed, Elemental Damage, and Critical Strike Chance and Multiplier. Keep your Elemental Resistances high through all the Acts, make sure your Maximum Life is high too. Use Essences of Hatred for added Cold Damage, Essence of Loathing for more Crit Chance, Essence of Zeal for Attack Speed, or Essence of Woe for Spell Damage

You're using an Elemental Hit so the Stats you're looking for are Elemental Damage with Attacks, Critical Strike Chance and Multiplier, Elemental Penetration, Attack Speed, Accuracy Rating, and added or increased Elemental Damage with Attacks. Your defenses are primarily Maximum Life and Elemental Resistances. Since you have Crown of Eyes, you can also look for Spell Damage. 155 Strength will be required for the Maximum Level of Shield Charge and Steelskin. It's a medium-priced build with the standard Rare Items that the market is overflowing with.