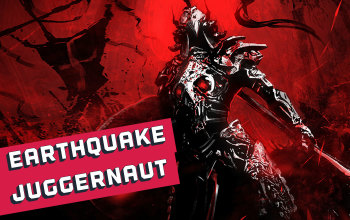 It's a very simple Bleed-type Build, it uses slow, but powerful Melee Slam Attacks to apply the DoT Ailment. It makes use of a Rare Two-Handed Axe and attacks with Earthquake Skill which is then upgraded by a Warcry - it makes your Attacks Exerted. We've settled on Rallying Cry which adds Damage to the Exerted Attack resulting in more Damage. With Resolute Technique you have a 100% Chance to hit - Bleed is an Ailment that does not benefit from Critical Strikes in any way. Earthquake is great with Bleed since it Hits enemies two times with a singular use, the second phase is stronger, so the Bleed applied by it will last for the next 3 to 4 seconds, making Attack Speed more or less obsolete.

As a Juggernaut, you're inherently Tanky. On top of your 5k of Maximum Life and 20k Armour, you can also reach 7 Endurance Charges pretty easily. The Endurance Charges will provide you with Resistances, Physical Damage Reduction, Damage, AoE, and Stun Duration. The Damage is provided mostly by your Rare Items, Passive Skills, and Skill Gems, there's nothing complex about it. Another great perk of this build is the Vaal Earthquake - you can use it often because of the Less Duration Support Gem which affects not only the base version of the skill - so that the second phase is triggered sooner, but also the duration of Soul Gain Prevention.

Use Earthquake on a pack of enemies that you Leap Slammed into. After killing one or two such packs you will be granted enough Souls to start Vaal Earthquake which enhances your steps to trigger individual Earthquakes. For Auras use Pride, Blood and Sand, Flesh and Stone, Herald of Purity, and Blasphemous Vulnerability. Remember to frequently use Rallying Cry and Blood Rage at the beginning of a map to deal more damage. As a Guard Spell use Molten Shell. During boss fights summon Ancestral Warchief for more Melee Damage.

It's a very general Physical Damage build which is very similar to other builds of the same type. All the nodes on the Skill Tree that you're interested in are tightly packed in the down-left corner of it. Start with Ground Slam and at level 28 switch to Earthquake. For Leveling, you can use almost any Unique Axe as these are all good weapons. The whole process should be easy, just look for Physical Damage and Maximum Life. You can specialize in Bleed and DoT very early on, the corresponding clusters are easy to reach, and the Bleed Support Gem should provide a high Bleed Chance.

25 Points Skill Tree
Go for the Resolute Technique and Bleed Cluster. If you're using a One-Handed Weapon pick Strong Arm instead of Butchery

Just try to accumulate as much Physical Damage, Damage over Time, and Maximum Life as you can. The Armour on your Body Armour is a valuable asset since it's doubled - that's why you can go for The Brass Dome if you feel like it. There are almost no required Unique items, but you should use some of the ones presented here since they're mostly cheap and perfectly suited for the build. You will need to look for intelligence since you won't get any from your Skill Tree. It's a Resolute Technique build - don't look for Accuracy Rating or Critical Strike modifiers.