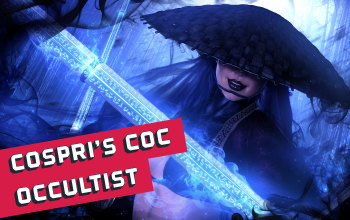 Cospri's Malice builds are one of the best builds based on the automatically triggered skills gimmick. Any Cold Spell that's socketed in there will be triggered on Melee Critical Strike. Ascendancy Class that's best suited for Dealing Cold Damage with Spells at close range is probably Occultist - Void Beacon and Frigid Wake are some of the most beneficial Keystones you can find for such build. You will take an advantage of Power Charges with another Keysone from Occultist's Ascendancy - Forbidden Power. Malediction will suit this build well allowing you to apply an additional Curse on enemies. Cyclone allows you to move while Channeling and has one of the highest Attack Speed of all Skills, but very low Damage, that, however, is not a problem. It is the only viable Attack that will enable Cospri's socketed Skills and the main setup of Ice Spear located in your Body Armour. Ice Spear having Anomalous Quality is a must-have Gem, a regular Ice Spear Projectiles won't pierce through the enemies at close range.

The build uses Energy Shield as the main layer of defense, combined with Shavronne's Wrappings, Presence of Chayula, and Prism Guardian it leaves you with a lot of space for Mana and Life Reserving Skills. You are also going to benefit from approximately 20k total Evasion Rating, resulting in a 70% Chance to Evade attacks, combining it with Ghost Dance, will allow you to take some damage. It's a Low Life build that uses Pain Attunent Keystone for increased DPS. Another important Keystone is Inner Conviction which can only be acquired via the Militant Faith Keystone - High Templar Dominus variant of it. It introduces Devotion Mechanics to your build which can be an upgrade or downgrade depending on the effect. You will use around 7 Auras or Heralds to boost your Damage leaving you with little to no Mana, but that shouldn't be an issue. The build uses two Large Cluster Jewels and four Medium ones - it enhances your Elemental Damage, Critical Strikes, Auras, and Curse effectiveness.

Build such as these are extremely non-engaging as you will use only one Skill - Cyclone. It will trigger Ice Spear, Creeping Frost, and Frost Bomb on every Critical Strike. For Boss fights, you can use Vortex with Curse on Hit. The mobility Skill of your choice is Flame Dash.

Leveling ES build is tricky, it's impossible to completely have just on Energy Shield as your Life Pool, Life is much more common and easy to access. At some point, you will have to respec some points on your Passive Skill Tree - withdraw the Life nodes, and put them into Energy Shield. We recommend doing it at level 80 or above when you're able to equip Presence of Chayula, Prism Guardian, and Shavronne's Wrappings and allocate at least part of the Cluster Jewel Passives. The playstyle of Cyclone and Cast on Crit is unique in itself, you will need an already high Crit Chance to properly deal damage. Play as a regular Caster until you're able to wiled Cospri's Malice. Use a wand with increased Spell Damage, or a Storm Prison. Any Cold Spell is good, it depends on your preferences which one you will use. Frostbolt is available since level 1 so it's good for a start. Essences of Scorn and Suffering could be helpful to quickly craft some leveling gear.

KIlling all three Bandits for two Passive Skill Points is the best option, but you can as well Help Alira for Mana Regen, Crit Multiplier, and Elemental Resistances

64 Points Skill Tree
look for more Maximum Life, Spell Damage, and Spell Crit. Chance, extra Mana from Mystic Bulwark, and Prodigal Perfection will be also very useful. From that point, simply allocate nearby nodes with those stats until you feel comfortable respeccing (basically when you have all the gear). Since this is quite an expensive end-game optimize build, this may as well be around level 90 or so

Major God: Soul of Solaris for 6% additional Physical Damage Reduction while there is only one nearby Enemy and 20% chance to take 50% less Area Damage from Hits

Minor God: Soul of Garukhan for reduced Shock effect on you and additional immunity to Maim and BLind

Presence of Chayula, Prism Guardian, Shavronne's Wrappings, and Cospri's Malice are the fundamental parts of the builds and there is no replacement for them, be sure you can afford all of them. Rare or Unique items with an increased limit or other bonuses for Power Charges are highly recommended. The build uses two Large Cluster Jewels and four Medium ones, but these are not mandatory, just highly recommended. Look for Energy Shield Modifiers, as ES will be your primary line of defense. Critical Strike Chance is the singular most important stat to increase your Damage, the other being Spell, Elemental, or Cold Damage, Critical Strike Multiplier, and reduced Cold Resistance for your opponents. Accuracy Rating and Attacks Speed are somewhat important for frequent and consistent Ice Spear Damage via Cyclone. You will need a lot of Dexterity - 212, so you can wield Cospir's Malice; 85 Strenght are required to use Prism Guardian, look for these Attributes.