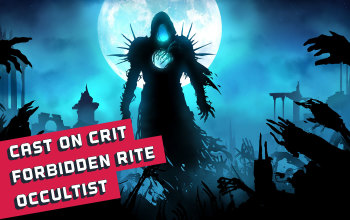 The Forbidden Rite is cast via Cas on Critical Strike Supporting Cyclone, it allows for much more frequent casts and better mobility but requires nearly 100% Hit Chance and Crit. Chance. You won't use Life, just Energy Shield with Chaos Inoculation for a complete Chaos Immunity, this includes the Chaos Damage you're dealing to yourself. In this setup, you should be using a Claw with Aegis Aurora which grants you instant ES on Block. Not only that, your Watcher's Eye should grant you ES on Hit while affected by Discipline for even better sustain. Just be sure that your Block Chance against Attack and Spells is capped at 75%, the best way to achieve it is to allocate Glancing Blows. Another Keystone you can use is Inner Conviction from Militant Faith for more Damage.

Invest heavily in Armour - for ES recovery on Block, and Crit. Chance - for frequent Forbidden Rite casts. You should be able to reach 6k of Energy Shield, capped Resistances at 75% to 80%, Chaos Immunity, capped Block Chance, close to 100k Armour, and ES Leech. The build is very flexible, the majority of items are Rare, and you can allocate two Large Cluster Jewels with up to four Medium ones. It's overall a very tanky build. You are also heavily encouraged to allocate an extra Keystone on your Ascendancy Tree via Forbidden Flesh and Flame, and if you have enough room for Elemental Resistances, use Melding of the Flesh for the extra Maximum Resistances.

Use Cyclone to trigger Forbidden Rite while Hitting an enemy with Critical Strike. For Auras use Discipline, Determination, Zealotry, Defiance Banner, Precision, and Tempest Shield. Use Assassin's Mark automatically triggered via Mark on Hit Support, Molten Shell for a Guard Spell, and Flame Dash. You can also use Vengeance to trigger various Spells such as Curse. Withering Step is great to boost your mobility and to cause Withered Debuff during boss fights.

Don't use Forbidden Rite until you allocated Chaos Inoculation, it requires you to accumulate enough Energy Shield, which you won't be able to do until the end of the Acts or after you started mapping. Use any Spell you're comfortable with leveling, Arc is a great candidate. Be prepared to respec a lot of Skill points as you start as a Life build dealing lightning Damage, later transitioning into a Chaos CI build. You should transition to ES after allocating Chaos Inoculation around levels 60 to 80.

68 Points Skill Tree
look for more Maximum Life, allocate the Maximum Power Charges and Disciple of the Forbidden, and prepare for the transition to ES build

Minor God: Soul of Ralakesh Moving while Bleeding doesn't cause you to take extra Damage, 25% reduced Physical Damage over Time taken while moving

Aegis Aurora is a great tool of ES Recovery, you should definitely get one as soon as you can, the rest of the gear provides mostly enough Accuracy for a 100% Hit Chance with Cyclone, 100% Critical Strike Chance for Cyclone, Getting 155 Strength and 120 Dexterity, and capping your Elemental Resistances. After that's settled, seek more Chaos Damage, Crit. Multiplier, Attack Speed, Block Chance, Armour, and of Course Energy Shield. Try to get some rare or craftable affixes for additional Power Charges and reduced Mana cost of Skills. You won't need extra Mana Reservation Efficiency if you have at least one Enlighten Support Gem at level 3.