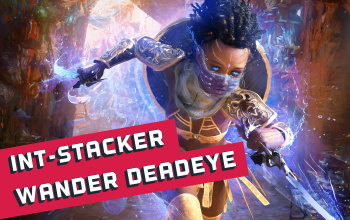 Wanders are considered one of the best and most expensive build archetypes with almost unlimited potential, great to farm the end-game content such as Domain of Timeless Conflict. This one is a Deadeye, it's an ascendancy heavily specialized in dealing damage via Projectiles, so it fits the overarching theme. With Endless Munition, you will fire additional Projectiles, Far Shot and Focal Points will massively increase your DPS, and Gathering Winds Keystone is used for Tailwind upgraded by Gale Force. It's evident that this is a glass-cannon-type build with almost no thought put into defensive capabilities, so it's only specialized in certain aspects of the end-game content which doesn't require being particularly tanky. However, due to the immense amounts of Intelligence, your Energy Shield will be increased by 300% to 600%, able to reach a total of 10k, it is easily doable. If the ES is not enough you can use Grace or Determination for more Armour or Evasion Rating. With Atziri's Reflection, you're also Hexproof, which is a big deal.

Stacking Intelligence is particularly important not only because of its inherent bonuses for Energy Shield but also because it is very easy to come across the offensively-oriented components which are increased alongside your Intelligence. These are Wand and Boots modifiers for increased and added Spell and Lightning Damage per Intelligence, Intelligence added as Accuracy Rating from Wand Mastery, and a Caster Mastery for increased Spell Damage per Intelligence. Now the Skills that should be used are Kinetic Blast and Power Siphon, which are both Attacks, not Spells, however, due to the Crown of Eyes' unique property, it will be no issue, as it ensures that Spell Damage is applied to your Attacks at 150% of their original value. Kinetic Blast will be the Attack to deal with multiple small enemies. Against Bosses use Power Siphon. It should Deal Lightning Damage only with a high chance for a Critical Strike.

Besides Barrage-supported Power Siphon to generate Power Charges and Kinetic Blast, the only other active skill will be Flame Dash to move around, but you could also use Shield Charge instead or alongside it. The Defiance Banner might be present in the build, in which case you can place it to gain some bonuses. For the Curse use Sniper's Mark, and if you're able to apply more than one, let it be Conductivity, applied automatically via Ring Affix. Guard Spell should be triggered automatically via Cast when Damage Taken - Molten Shell or Immortal Call. For your Auras use Wrath, Discipline, and depending on your setup - Grace, or Determination.

The final build uses two Large Cluster Jewels, and it's fully dependent on Energy Shield. Crown of Eyes - the core element of the build - is available to equip no sooner than level 69, so there is no way to level up this build without respecing a lot of skill points, but compared to the overall price of it, it should be a relatively cheap endeavor. As Deadeye we recommend starting with a Projectile Skill. We recommend an Ice Shot used with a Bow and getting some of the Cold and Elemental Damage from the passive skill tree, there's a lot of it very close to the Ranger's starting location. You can easily grab the 40% Physical to Cold conversion from a Cold mastery, and spend some points in Maximum Life and Bow Damage nodes. This Ice Shot build can carry you all the way into yellow or red maps, then you can think about switching to the final form. Most of the rare items will have a high-level requirement anyway.

33 Points Passive Tree
Take the Cold Mastery with Winter Spirit, Herbalism, and head for the big Bow Cluster. Pick up the scattered Notables along the way.

The only mandatory Unique Item is the Crown of Eyes, it's used to make your Spell Damage apply to Attacks at a higher value It's cheap so you can try corrupting it. Atziri's Reflection is a very popular choice as it makes you Hexproof and has a lot of other suitable parts. Usually, Rare items will be the ones to grant you the most Intelligence - Wand, Boots, and Gloves will need to have some very specific modifiers, these items can get expensive. This build does not convert your damage, the base Lightning Damage is sourced directly from Items and Spell Damage modifiers. Besides gathering Intelligence, you will also need a somehow decent Accuracy Rating, Critical Strike Chance, and Multiplier. For defenses seek Energy Shield mods. The build will require around 155 Dexterity and Strength to run all the Gems at their maximum level. It also uses two Large Cluster Jewels and around two Medium ones.