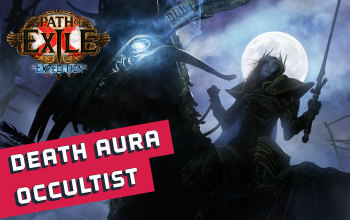 Caustic Arrow and Death Aura from Death's Oath Unique Armour are some of the best Chaos DoT skills in the game. Death Aura is a skill very similar to Righteous Fire, it creates a damaging field around your character that deals DoT to surrounding enemies. It makes you take quite Chaos Damage as you kill enemies, so naturally, you will need to heavily invest in Chaos Resistance. The simple way is to take Chaos Inoculation, but it's really inefficient. The more common approach is to accumulate a lot of Chaos Resistance and Maximum Chaos Resistance from items and Skill Tree. Your Final Chaos Resistance should be between 80% and 90%, making you practically immune to it. With such investment in Chaos Resistance and Chaos Damage over Time, the best option for the Active Skill is Caustic Arrow. Normally it will be used against bosses and other, more powerful enemies.

It's a Life build with a high Chance to Dodge Spells and Attacks. Your life can in the later stage of the game reach 5k with a Chance to Dodge Attacks equal to 40% and Spells - 30%. Withering Step, Curses, Cluster Jewels, and high Chaos Resistance provide you with a lot of survivability. Occultist Ascendancy is undoubtedly the most preferable, Void Beacon and Withering Presence are practically made for this build, Profane Bloom will immensely help will clearing maps, and combined with Meladiction, your Curses will have a devastating effect. If you played Toxic Rain or a similar build previously you will have no problems getting used to this one, you can even re-use a lot of items, especially Cluster Jewels which are really important. The most important offensive stats are Chaos Damage over Time, while for survivability look for Maximum Chaos Resistance and Maximum Life.

The gameplay consists mostly of running into a pack of monsters and killing them instantly via Death Aura combined with Profane Bloom which causes an explosive chain reaction. Caustic Arrow is a secondary Attack, reserved for dealing with tougher opponents. Whitening Step is one of the mandatory Skills as well - it not only grants Phasing and Elusiveness but also applies a few stacks of a debuff that makes opponents take more Chaos Damage. Dash or Flame Dash are used as a mobility skill to quickly dodge attacks. All the Curses will be cast as Auras via Blasphemy Support making it really smooth to play build.

We recommend equipping Hidden Potential Unique Jewel and exploiting its early-game potential a bit, just two Magic items are good enough to make it worth allocating. Use Magic items with one or two useful mods such as Maximum Life or Chaos Damage, but be mindful that some unique items could be useful too. Leveling might be tricky since you obviously can't use Death's Oath until you start mapping. Combine Spellslinger Support with a Chaos DoT Spell such as Bane, Despair, and Efficacy. Invest your Passive Skill Points in Maximum Life and Chaos Damage or Damage over Time. Switch to Caustic Arrow and Death Aura only after your Chaos Resistance is around 80%.

The build is similar to other Chaos DoT builds, except you put much more emphasis on Maximum Chaos Resistance - with Death's Oath you take really a lot of Chaos Damage. All the recommended unique items, except optional Jewels, are cheap. Your most expensive purchase will be probably a Rare Bow with few mandatory mods to increase your damage. 180 Strength are required to put on the Death's Oath, and 155 or more Dexterity depending on what Bow you're using. Look for Chaos Damage, Damage over Time, and of course Maximum Life.