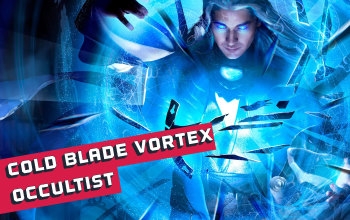 Blade Vortex is one of the most popular Physical Spells in the game, it's a very basic skill that creates orbiting blades around the character. These blades - vortexes, deal damage at such a rapid pace that they can be compared to a Spell version of Cyclone. You can stack up this damaging effect up to 10 times, each time it grows in damage and size. Normally it would require you to stop and cast it a few times before reaching the threshold of usefulness and continue mapping, but not in this case. It can be linked to the Unleash Support Gem and cast 5 of them all at once, which is more than enough to map comfortably. These vortexes last for 5 seconds. Blade Vortex, due to being a Physical Spell, creates a great opportunity for a conversion build, as physical damage is the easiest one to convert. Occultist, among many other virtues, is very good at dealing short-range Cold Spell Damage, and so this skill suits this ascendancy perfectly. For defenses, the build utilizes a medium-sized Life Pool, Life Leech, and around 20 to 40k of Armour.

To convert Physical Damage to Cold Damage you can combine the Cold mastery with a special pair of Rare Gloves, or use Hrimsorrow Unique Gloves. On top of that, you will be able to add a lot of Cold Damage sourced from Physical Damage (from before it is converted). The build is capable of reaching a 100% Critical Strike Chance by using Passives, Power Charges, Flasks, and Assasin's Mark. In this guide, we will go with a version that uses a Rare Bow and the Asphyxia's Wrath Quiver instead of Void Batteries. The Quiver/Bow combination grants a lot of damage due to the local Bow modifiers, the Frostbite Curse from Quiver, and it also provides you with a higher chance to Freeze enemies, making it particularly good with Herald of Ice, you won't need the Profane Bloom Keystone for your clear speed is already excellent.

Cast the Blade Vortex every 5 seconds, it will grant you 5 stacks of vortexes, as each seal is granted every 0.7 or-so seconds. With Herald of Ice and 100% Chance to Freeze mapping goes very smoothly. Implement the regular Vortex skill to the build, it should be used as often as the cooldown allows you to. It will apply a powerful Chill effect and grant an Arcane Surge. For more damage use the Vaal version of Blade Vortex, you can cast up to two of the independently-moving vortexes that deal much more damage. With Malediction, you're able to apply two Curses - one Frostbite from the Unique Quiver, and Assassin's Mark, cast via Arcanist's Brand, which also casts Frost Bomb to apply Exposure and reduce life Regeneration. For a movement skill use Flame Dash, and for a Guard Spell - an automatically-triggered Molten Shell. The Auras you should be using are Determination, Hatred, Herald of ice, Herald of Purity, and if you still have some Mana left - the Defiance Banner or Zealotry.

As an Occultist, we recommend starting with a Spell that has a high base Critical Strike Chane, then immediately start investing in Power Charges, and getting items or skills related to this game mechanics. As your starting location is close to a lot of Elemental/Lighting Damage nodes, we recommend picking up a purely Lighting Spell, such as Arc. It's available at level 12, so pick up the Stormblast Mine first. Later, you will be able to incorporate/switch to Ball Lightning to deal with bosses, as Arc is not very good at it unless you have it six-linked with Tabula Rasa and have a good source of Mana Regeneration. Vaal Blade Vortex becomes really good at higher levels, Gem Levels that is. Level 21 Vaal Blade Vortex is very Expensive, so we recommend leveling it up by yourself under a switched weapon (x), and vaaling it as it reaches maximum Gem Level. After your second or third ascension, you'll take the Void Beacon Keystone - very useful for Cold and Chaos Damage setups, but useless for Lighting Damage ones. That's the point you might want so start using Cold Damage Spells. You should switch to Blade Vortex later in the game, as the Lightning/Cold Damage setup grows weaker, it's around yellow or red maps, or perhaps even sooner. We prepared the leveling skill tree in such a way as to not make it cost a lot of Regret Orbs, it's for the most part a general Power Charge setup with specific nodes for Lightning Damage sprinkled here and there. You can also get the Large and Medium Cluster Jewels early on if you have a budget, and start using them at level 54, these offer a lot of Damage.

62 Points Skill Tree
Allocate all the nodes for an Extra Maximum Power Charge, some more Maximum Life, and Cast Speed.

The build has a lot of ways to gain more damage, the most efficient way, however, is to increase the Gem level of the Vaal Blade Vortex. It can be done by equipping a Bow with local modifiers, and a Body Armour or Amulet with global modifiers. Try to reach 100% Critical Strike Chance, Critical Strike modifiers can be found quite easily in a majority of rare items. Added Cold and Physical Damage, or better yet - the Physical Damage as Extra Cold Damage, is also very helpful. For defenses seek the usual Maximum Life, Resistances of any kind, and Spell Suppression Chance with some Armour. The build needs some extra Strenght and Dexterity to make it work. It also would be extremely difficult to fit all the necessary Auras with no additional Mana Reservation Efficiency from a rare Amulet, Helmet, or Small Cluster Jewels. The only mandatory Unique Item here is Asphyxia's Wrath, it doesn't have any overly-unique build-enabling quality, but it's just the best-in-slot Quiver, better than any Rare one.