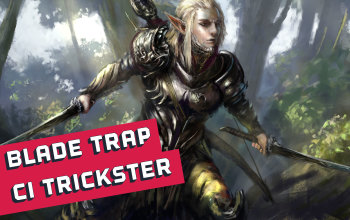 Trickster is an ascendancy poorly defined by its offensive abilities, but one with much more pronounced defenses. It can be used to create some unique builds that need to be tanky due to their delay in damage delivery or close range. By utilizing Evasion Rating, Spell Suppression, and Energy Shield, any build contoured for a direct confrontation with opponents is potentially much more viable even if its premise seems downright ill-suited. Such is the case with Blade Trap, the only Attack Trap in the game. Traps are almost exclusively the domain of a Saboteur due to their Perfect Crime and Chain Reaction Keystones, but by allocating one of them via a pair of Forbidden Jewels, its title of the only viable Trap class can be disputed. We also recommend picking up Polymath and Swift Killer to magnify the damage. Blade Trap is chosen because of its ramping up damage which can be expressed by continuously throwing more and more Traps, it's a feat not achievable for a glass canon build. Trap builds often struggle with the fact that the damage is not delivered fast enough so the enemies in proximity might have a chance to attack and kill the character - it's not happening here. The Damage of these Traps is directly correlated with the weapon but doesn't benefit from Attack Speed as their Attack Rate is fixed.

Blade Traps deal almost solely Lightning Damage with a medium to high Critical Strike Chance here. We've settled on Lightning Damage over other types due to the choice of Unique Weapon and the proximity to Lightning Damage nodes like Arcing Blows. As a Polymath, the majority of your damage is sourced from different Masteries, so choosing a different damage type is something the build can be adapted to with ease. For defenses, we've decided on a Chaos Inoculation build for a complete Chaos Resistance. The other protective layers are: Fortify, a very high Evasion Rating, a 100% Chance to Suppress Spell Damage that is 20% more effective, Phasing, and around 6000 Energy Shield. Spellbreaker and Wicked Ward ensure rapid ES regeneration each time you're hit with a Spell, the Recharging does not stop after continuing to receive damage.

It's a build similar to a Trap build, throw the Blade Traps to kill enemies around you. The Damage can be supported by Bear Trap which also immobilizes the target. You're able to apply two Curses, it can be done automatically via Implicit modifiers or Ring Affixes, or by a Skill with Hextouch Support. To move around use Whirling Blades with Fortify Support and Flame Dash. Withering Step is also great for a passive Movement Speed bonus and Phasing with Elusive. For Auras use Grace, Discipline, Skitterbots, Defiance Banner, and Precision.

Start with an Explosive Trap, the first skill points you will allocate are Trap-related. Blade Trap is available at level 12, but don't use it too soon as it won't be good if you don't have a good weapon. Hyaon's Fury is available at level 62, that's around acts 8 to 10. Before that use different Spell Traps. These won't require Accuracy or a weapon with high base damage. Your first Ascendancy Keystone is Polymath - try to get some different Masteries right from the start. On the passive skill tree, allocate only Maximum Life, Trap, and Mana Reservation nodes at first. Later find some more space for Critical Strike modifiers and Energy Shield. Then go for the Lightning Damage, Accuracy Rating, and Sword Damage. As you already got a gear plentiful with Energy Shield, relocate some of the Maximum Life skill points into Energy Shield.

37 Points Skill Tree
Head for the big Trap cluster by taking some useful nodes on your way there.

71 Points Skill Tree
You now have the Polymath Keysteon so start gathering Masteries. Head for the big Fire Cluster and pick its Mastery for Damage conversion.

We've tried to cut the costs of gearing up here to a minimum, using some of the cheapest unique items and combining them with meager rares which can be obtained at a very low price. Hyaon's Fury is not a very good weapon in most cases, but it has a very high base Lightning Damage, so you won't need to convert any of it from Physical. Over 50% of Spell Suppression Chance can be gathered from the Skill Tree, the rest should be gathered from gear. Evasion Rating and Energy Shield are important too. Keep in mind that due to Escape Artist Keystone you can gain extra defenses from ES on a Helmet and Evasion on Body Armour. Remember to get some extra Accuracy on Gloves or a Helmet. If you struggle with Mana sustain aim for reduced Mana Cost of Skills. Attack Speed is useless.