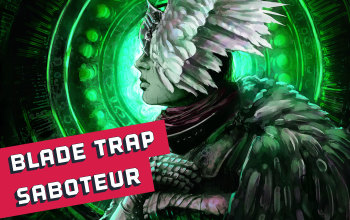 Blade Trap is a newly added Trap that's also an Attack, making it a first of its kind - all the other Traps are Spells. It means is that that now your Weapons - Claw, Swords, or Daggers will be responsible for the overall damage increase. The Trap upon activation releases a blade, or two if you're dual-wielding. The blades rotate four times (five while dual-wielding), and the trap lasts four seconds (three if dual-wielding). The Attack Damage has 55% effectiveness and so are modifiers to it. Saboteur can still be considered one of the best options as a user for this Skill, his starting location on a Skill Tree is in close proximity to Claw, Dagger, and Trap clusters, and that gives him an immense advantage. The Ascendancy Points that make this class the best candidate for trap builds are really powerful, and for this build, Saboteur is the most optimal choice. The heat map of Skill Point you spend will shift to the Raider and Duelist starting locations where you can find quite a few Dual Wielding and Elemental Damage nodes.

The damage from Blade Traps can overlap, which makes it a great Single-Target Damage skill. There are a few ways on how to play this build, it could be done by utilizing Poison Damage, which would make this build Similar to Blade Blast, but this time the Poison Damage would be based on the weapon's damage, not on Physical Spell Damage. Another way to assemble this build could be done by equipping Vulconus - a Unique Rune Dagger that deals tons of Fire Damage with Hits. With investment in Elemental Damage, it is another candidate for a Blade Trap build. This guide will focus on this Fire Damage variant of the Blade Trap.

It's a Life build, but it can be later easily transformed into ES one. Saboteur offers one-of-a-kind synergies with Traps, and thanks to Explosives Expert combined with Skitterbots you will be able to pull off endgame-viable damage. High Critical Strike Chance, Fire Damage and Penetration, Trap Damage, and Attack Damage will be the nodes to look for on your Skill Tree. Avatar of Fire will convert all of your Damage to Fire Damage. Despite not having a lot of maximum Life, the build is actually pretty tanky - it has a High Evasion Rating combined with Wind Dancer, Dodge Chance, great sustain in combat thanks to Pyromaniac, and permanently Blinded Enemies that real reduced damage when you are yourself immune to it.

The gameplay is similar to other Trap Builds, such as Lightning Trap. Throw Blade Traps in a pack of enemies to dispose of them quickly. Dash and Whirling Blades are excellent Movement Skills that will be used together for better mobility and Fortify buff. Skitterbots are very important - they Chill and Shock enemies. You are also going to use Wave of Conviction linked with a Curse, Combustion Support, and Cast when Damage Taken so that it's triggered automatically. This build offers insane single-target DPS, mainly against stationary Bosses with immunity phases that allow you to plant your Traps before the fighting continues, while when it comes to farming packs of enemies it's less convenient - mainly because of the delay between you throwing your Traps and they getting triggered and killing enemies. You will often find that throwing your Traps and instantly Dashing into those packs can get a bit risky.

Blade Trap is available since Level 1, and it is recommended to start with this Skill. Use a rare Dagger or Claw with high Physical and/or Fire Damage. You can use an Essence to quickly craft a weapon with one desired mod - Essence of Anguish or Contempt on Gloves, Rings, or Amulets.

35 Points Skill Tree
Go for Coldhearted Calculation and take the useful nodes you come across, then head for the Mine and Trap Cluster as pictured picking up Nightstalker and Blast Cascade on the way

67 Points Skill Tree
Now go for the Keystones - Acrobatics and Phase Acrobatics for a massive boost to survivability. Then you can pick Primeval Force/Thick Skin/Wind Daner or go left for Forces of Nature and Revenge for the Haunted (that's up to you, we recommend going down first)

Initially, even before you even start mapping, make sure your Elemental Resistances are capped at 75%. To increase your Defenses look for Maximum Life and. Equip two Vulconus Daggers, the blades you wield are really important and Vulconus provides a lot of raw damage and a solid chunk of other bonuses that ultimately make it a very strong contender for a weapon of choice. Remember you're limited to Claws, Daggers and Swords with Blade Trap. To increase your Damage look for mods such as Physical/Fire/Fire Penetration/Attack/Dagger/Trap Damage and Critical Strike/Multiplier. Around 150 of Strenght, Intelligence, and Dexterity are required - you'll have to look for Intelligence as your Passive Skill Tree will not provide you with a sufficient amount of it. Don't look for Melee Damage or Attack Speed - these stats are obsolete in Blade Trap build.