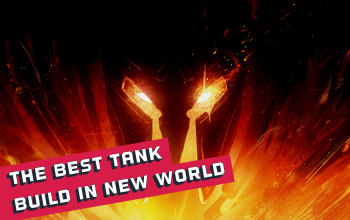 Best Tank Build for New World with Sword & Board

New World Online returns to the roots of the classic MMORPG genre and the importance of all three major character roles (DPS, Tank, and Healer) is back to glory. With the implementation of Expeditions and Dungeons, where players have to form a team of fighters to deal with the most challenging enemies, you and your friends are surely going to need a solid Tank to soak up damage and allow you to defeat the toughest Bosses. The following setup is presumably the best PVE setup for a primary tank character. Not only, you can expect to take down tons of damage without going down, but you will also control the entire battlefield with various CC abilities and debuff enemies, offering the best team utility out there.

Our recommended setup revolves around using Sword and Shield as your primary weapon - which is a natural choice for a Tank character in New World. And while the game offers some flexibility when it comes to choosing your secondary Weapon (well, it might be technically possible to tank without the shield too, but that's yet to be determined when the full game is released, and we get to test it) but we are strongly recommending using War Hammer. War Hammer is the best Crowd Control weapon that you can use with its' Crowd Crusher tree (yes, the similarity is not coincidental). At the same time, War Hammer is decent for leveling, and with small tweaks, it is also one of the best weapons for PvP.

You can also check our other NEW WORLD ONLINE BUILDS