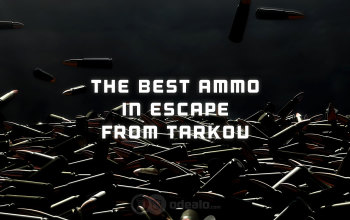 Best Ammo in Escape from Tarkov

Bullet flight in Escape from Tarkov is affected by things like muzzle velocity, bullet weight, air friction, bullet type(its shape and so on), and gravity. This means that the heavier and slower a bullet is, the larger its drop-off over distance will be (that is why your VSS is not that accurate at longer ranges).

The effect that a bullet has on the body is simulated at the point of impact. Damage done depends on an affected body part, bullet's distance traveled before a hit, possible fragmentation, and a player position in reference to the shooter (bullets can penetrate multiple body parts for increased damage; for example, if a bullet hits your arm, pierces through it and then enters your chest cavity, you will suffer higher amounts of damage). Please note that Damage Dealt is based on an Ammunition type, and not on a Weapon!

Armor protects its wearer from taking damage when struck by certain bullet types, depending on its Armor Class. In Escape from Tarkov Armor can stop a bullet completely; when this happens a % of bullets damage is done to the durability of the armor (Armor's protection quality lowers gradually as it loses durability), and the player receives some amount of "blunt" damage - a result of the bullet's impact force. Every bullet type in the game has its Armor Penetration Value, the higher it is, the better the chance for a penetrating hit it has. If a bullet penetrates the armor, it does its full damage to the body (unlike in other games, when armor reduces damage taken by some set percentile). This is why the right ammunition choice is necessary for fighting heavily armored targets effectively.

This Guide aims to describe the best ammunition types of every caliber present in the Escape From Tarkov. There a lot of statistics listed down below, so here is a quick roundup of their meaning:

You can also check our list of the best "budget-friendly" weapons in EFT in this article: Budget Weapons in EFT