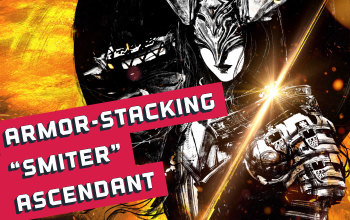 It's an Armour-stacking build that uses Replica Dreamfeather Unique Sword that increased Attack Damage per Armour. You will be using Smite that Converts half of your Physical Damage to Lightning Damage, and the two Call of the Brotherhood Unique Rings to convert Lightning to Cold. Smite also grants you an Aura to increase your Lightning Damage witch is especially beneficial since you're using multiple auras with their effect magnified many times over, this includes Smite's Aura. While Stacking Armour is relatively easy - you seek Armour or Evasion Rating to convert it later with Iron Reflex keystone, fitting all the Auras is a bit more tricky as it requires multiple sources of Mana Reservation Efficiency. To help with that you should use March of the Legion Unique Boots and Support your Auras with the highest cost with the Blessing Skill that this pair of boots provides - you pay the cost of the Skill Reservation once, and the Aura lasts for ten to twenty seconds and then you'll able to cast them one-by-one.

Smite is a short-range Elemental Strike Attack that should have a somewhat high Critical Strike Chance, for that use Precision; if your Crit chance is low, allocate Elemental Overload Keystone. you should also have Wrath and Hatred to boost your Damage. Your Block Chance should be high as you're using Aegis Aurora. You will use CI Keystone that makes you immune to Chaos Damage so you're forced to rely on Energy Shield only, around 3 to 7k depending on your gear. Character's Armour will be obviously very high, over-capping the Physical Damage Reduction easily, use Purity of Lightning, Fire, and Ice for extra Maximum Elemental Resistances, Discipline for more ES, Determination, Grace, and Defiance Banner for more Armour, Vitality for Life Regen, and Clarity for Mana Regen. It's a lot of Auras, some of them won't fit in your Mana Pool at level 20, and some might not even fit at all, but it should be your primary objective to do so. You will be also using as many Small Cluster Jewels with Introspection for increased Aura Effect, Voices are extraordinarily expensive, so use four Large Cluster Jewels with 8 Passive Skills.

It's a very simple gameplay-wise build, use your Smite to attack enemies, Ancestral Totems to boost your damage, Molten Shell as a Guard Spell, Leap Slam as a Movement Attack, and most importantly - you will have to constantly enable your four Blessed Auras socketed in March of the Legion, the rest of the Auras stays on at all times. Your Curse can be applied by finding a Gloves' Corruped Implicit such as "Curse enemies with Elemental Weakness on Hit". Support your Smite with Ancestral Call Support to have a bearable clear speed.

Leveling Scion build such as this is especially difficult, the late-game Skill Tree focuses mostly on outer Sockets and Aura Clusters, and you can't level like that. Additionally, it's a Chaos Inoculation build, but you have to begin leveling with Life instead of ES, and later transition to Energy Shield. Your best option is to start with Smite Skill and link it with Ancestral Call, then focus on Attack Damage and Maximum Life. After you've allocated around 70 to 90 Passives, switch to CI and Energy Shield by respecing a lot of previously needed Life Passives.

Build Requires specific Unique items, and it additionally heavily relies on Flasks to increase your Damage and Surviavbilty - use Evasion and Armour Flasks and aim for at least half a million Armour while these are active. To never run out of Flask Charges have a way to constantly gain these Charges back with items or Flask mods. Cluster Jewels are crucial as you can get increased Aura Effect, and Mana Reservation Efficiency on just one well-rolled Small Cluster Jewel, multiply it by eight and it adds up to an 80% increased Aura Effect and 48% increased Mana Reservation Efficiency just from these, additional sources are found on Skill Tree and gear. Look for Armour, and Evasion Rating that is transformed into Armour after allocating Iron Reflex. You won't need as much Resistance as normally since the Purity of Fire, Ice, and Lightning should provide 132% of Total Elemental Resistances. The more significant portion of your Armour won't actually come from gear but from Auras. Seek Elemental or Cold Damage with Attacks, Critical Strike Chance, and Attack Speed for more Damage, and Energy Shield for a bigger "Life" Pool. Grace requires you to get 155 Dexterity which you will need to look for, Strenght and Intelligence should be easily covered by your Skill Tree.